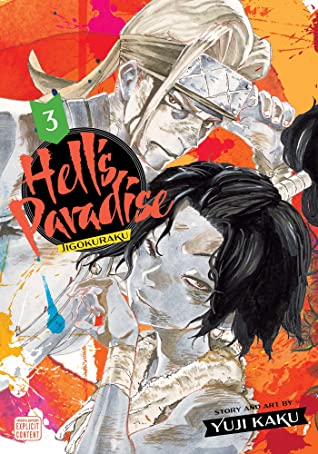 A group of sinister beings have lived on this island for several lifetimes, tinkering and experimenting on humans and the local fauna to further the goals of their dark sciences. Who are these otherworldly individuals that rule this beautiful and deadly island and how will Gabimaru manage to kill them to achieve his goal?

With the introduction of the beings that rule the island, the mystery of the island is starting to be revealed in this book. Gabimaru and Sagiri, along with Yuzuriha and Senta come across one of the inhabitants of the islands, a young girl, Mei, and then her protector, Hoko, who invites them into his shelter and provides them food and rest. While they are regrouping and gaining information via Hoko, who tells them about the lord Tensen that rule this island, as well as the location of the elixir, and how the island thrives due to it, Gabimaru is itching to get to the elixir and get it over with, so that he can return home to his wife. However, defeating the beings that rule the island is a challenge, especially when they are capable of instantaneous regeneration – a fact that Nurugai and Tenka on the other side of the island have also to fight against. While Tenka’s teacher Shion comes to help, they are still outmatched. And with the beings themselves regrouping and preparing for a stronger assault from the humans who have come onto the island, it looks like the path to the elixir is getting even more difficult. I am worried about the odds against them, but also curious about how Gabimaru’s village’s chief was able to get his hands on it.