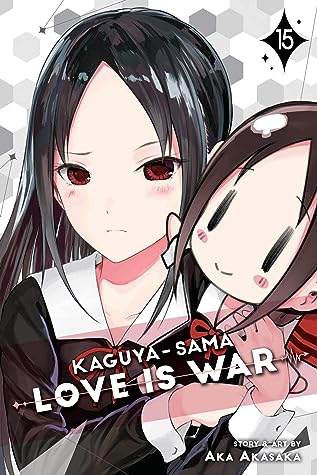 Turns out confessing your feelings is the easy part of a romantic relationship… Now Kaguya and Miyuki have to figure out how to behave in a relationship. Kaguya retreats behind the ice shield she built to protect herself years ago. Miyuki believes only an ideal version of himself is worthy of love. Ai/Haski, as usual, is caught in the middle. Will our two not-star-crossed lovers ever learn to let go and just be themselves…?

First, you have to love yourself.

From the stress of her basically-a-confession and agreeing to go with Miyuki to college, Kaguya sort of broke down and we see the emergence of Ice Kaguya – who is, well, cold and calculating, while also very conflicted about her feelings for Miyuki. And poor Miyuki – he can’t figure out what is going on with her, and why is she playing mind games with him (more openly, than the subtle ones they had before), denying that their kiss meant anything but also wanting him to kiss her. In this book, we get to explore Kaguya’s and Miyuki’s pasts and how it shaped them, their stakes in this relationship, and their reasons for their decisions going forth now.

For Kaguya’s part, we see her much younger version, who has friends because their parents are close to her parents, but herself not knowing how to deal with human emotions because they have been trained out of her. Only knowing how to be perfect at everything, and evaluate people, she causes a lot of hurt to her friends, which makes her retreat into her icy persona, to keep from hurting more people. Now, when she has real friends, she is once again afraid of inadvertently hurting them. Miyuki, meanwhile, has a complex about appearing strong and a winner – so much so, that his whole personality as the student council president is a persona he wears (which we knew, but now we know why); as we have seen before, and see again in this book, he hates it being known how hard he works to look accomplished. Even now, with Kaguya, he doesn’t want to look too earnest and too hard-working, like it should come easy to him because he is supposed to be a genius, but she is also asking him to be vulnerable to her.

While there were a problematic statement or two during this whole mess, I feel that expanding upon their relationship and what love would mean for them, as well as what ‘healthy’ means in their context was a nice arc for this book. Besides these, there were also Christmas parties! We get to see how the party is at Chika’s house – a weird mix of Japanese and Western elements that confuses the heck out of the Shiroganes and Kaguya. Overall: it was quite different from the regular battles the two have, but I loved the more serious nature of this book; it really felt it was due for some.