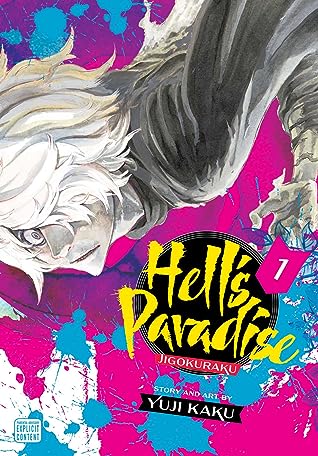 Gabimaru the Hollow is one of the most vicious assassins ever to come out of the ninja village of Iwagakure. He’s ruthlessly efficient, but a betrayal results in him being handed a death sentence. He has only one hope—in order to earn his freedom, he must travel to a long-hidden island and recover an elixir that will make the shogun immortal. Failure is not an option. On this island, heaven and hell are just a hair’s breadth away.

An assassin is given a chance for complete pardon, and is being watched over by an executioner who wants to be her family’s ideal in this Edo-era series where a mysterious island holds the secrets to immortality. Gabimaru’s execution was attempted many times, but with his immortality, even if he was willing it seems impossible; Sagiri, who had come to observe the proceedings realizes that he is living for something, despite claiming that he doesn’t have anything to live for. She proposes that he participate in the quest for an elixir, where many such criminals marked for execution have a chance to win full pardon if they find and deliver it to the shogun. The latter half of the manga introduces us to the various criminals who are accompanying them on the journey, each of them being assigned a watcher from Sagiri’s family of executioners and blade testers. But their time is also running out, because the next wave of people sent on the quest will be the other immortal ninjas from Gabimaru’s village.

Gabimaru and Sagiri have an interesting contrast – for Gabimaru, family (his wife) is the reason he wants to get out of the killing business, while Sagiri, being a woman and thus looked down upon by her peers, wants to prove she can be an executioner without hesitation. Seeing Gabimaru’s single-minded attitude towards necessary violence, she has a change in her outlook towards the burden of taking lives. The other characters seem mostly filler right now, especially the criminals who are basically like boss battles for Gabimaru and they all have the same strategy: eliminate the other criminals first and then search for the elixir. Meanwhile, the island itself is a deadly thing – turning humans to plant-based creatures with a mode like contamination. The artwork is a bit messy, and sometimes makes things unclear, and mostly skips over the action, delivering us the outcome of the fight instead. There are also pages devoted to judging the ‘style’ of the characters, which I admit are hilarious.

Overall, it’s violent and slightly overdoes it on the gore, but I can see a good storyline shining underneath.