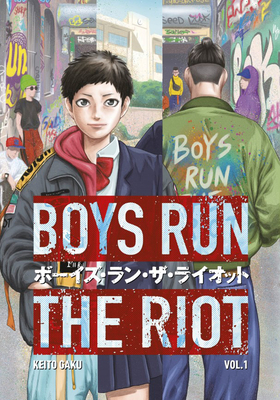 A transgender teen named Ryuu finds an escape from the expectations and anxieties of his daily life in the world of street fashion. This personal, heartfelt, fictional story from a Japanese transgender manga creator made waves in Japan and will inspire readers all over the world!

High schooler Ryuu knows he’s transgender. But he doesn’t have anyone to confide in about the confusion he feels. He can’t tell his best friend, who he’s secretly got a crush on, and he can’t tell his mom, who’s constantly asking why Ryuu is always dressing like a boy. He certainly can’t tell Jin, the new transfer student who looks like just another bully. The only time Ryuu feels at ease is when he’s wearing his favorite clothes. Then, and only then, the world melts away, and he can be his true self. One day, while out shopping, Ryuu sees an unexpected sight: Jin. The kid who looked so tough in class is shopping for the same clothes that Ryuu loves. And Jin offers Ryuu a proposal: to start their own brand and create apparel to help everyone feel comfortable in their skin. At last, Ryuu has someone he can open up to–and the journey ahead might finally give him a way to express himself to everyone else.

“No Shame In My Game”

In my very limited time of living on this planet, I don’t think I ever read a comic that was so emotional to me, more educational or endearing then Boys Run The Riot by Keito Gaku. It’s one of the only prominent manga that gives you a huge dive into the LGBTQ+ in japan, what it means to have gender dysphoria and the struggles of accepting who you truly are while coming to terms with it while you have friends who will support you. Ryo journey with this delinquent student, Jin is so precious. Jin acceptance could be due to his simple nature or he doesn’t completely understand Ryo’s plight but he has his back. He wants to make a fashion brand so they can both expressed themselves, Ryo through his graffiti and Jin with his designs. I loved how Keito managed to show us the depth of both characters, side characters too and their development. How difficult it is to come out as a transgender person and the sacrifices it brings with, which was suggested in the end of the volume and im intrigued to see where this will go. Also the artwork… DEAR LORD IS IT BEAUTIFUL. I especially can’t draw my eyes away from the graffiti in the end of chapter 1. That will be forever etched to my brain. Please, support this manga, the author, buy it, spread the news, let more people know about this because it’s going to be one of the best series published to date. I can’t thank enough Kodansha Comics for bringing this into localization. Thank you.

Is it Diverse? A trans boy protagonist, genderqueer side character.

One thought on “ARC Review: Boys Run the Riot Vol. by Keito Gaku”