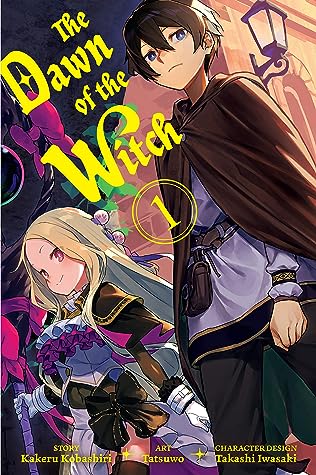 The Dawn of the Witch Vol. 1 by Tatsuwo (Illustrator), Kakeru Kobashiri (Original Creator) and Takashi Iwasaki (Character Design)
My Ratings: 4/5

Saybil is a magic student with no memories of his life before he met a mysterious silver-haired woman in an alley. Now he travels with his teacher, Loux — another student, Holt, and the beastfallen Kudo for “special training”… but this field trip may not be as routine as it seems!

One of my favorite setting in every fantasy story is about magical schools or prestige academies teaching the arcane arts. To witness the cool magic system, engage with the plot and be enamored by the cast of characters and The Dawn of the Witch is hitting the margins.  It’s a pretty straightforward idea, a not so great student is failing miserably at his classes due to his lack of control of his magical capabilities and is a breaking point of dropping out. However dropping out from the school is barley unheard off, so the headmaster sends him along with a party of colorful characters to the country side. A pretty queer teacher who volunteered herself to a job due to her amusement, a beastfallen classmate struggling to belong and the only other student in the academy that cares for him who will care once his gone. It is a fun first installment to a new series that I’m fully going to follow because things are heating up and the artwork is admirable for its story and I can’t wait to see what’s comes next. Try it out!