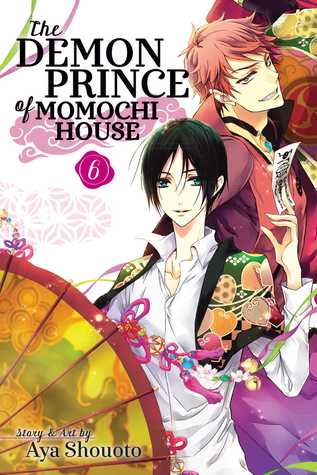 The Demon Prince of Momochi House, Vol. 6 by Aya Shouoto
My rating: 3.5 of 5 stars

With Aoi having rejected Himari’s confession, both of them are in a state of distress – she is saddened and confused, while he is distracted. At this time, Himari’s school gets a new teacher who focuses on the occult, and an interest in the Momochi house, who shows her a mirror that lets her see inside a person’s heart. She is tempted to use it to see Aoi’s feelings but decides not to; however, something feels weird about the people around her, and she has to fight against the mirror’s magic. Back at Momochi house, they have a visitor return, a nekomata who is fond of Aoi and protective about him, and who tests Himari to be a suitable presence in the house. Here, we again see another aspect of parental affection among ayakashi and humans, as the nekomata is crafty but still motherly in her machinations. Himari’s intentions to free Aoi from Momochi house also comes into question, as the nature of his transformation into the nue once agains places doubts on how much human he still is. As a whole, this volume doesn’t really advance the plot that much, but the introduction of the new characters, especially that teacher, certainly leads to more potential threads of the story.