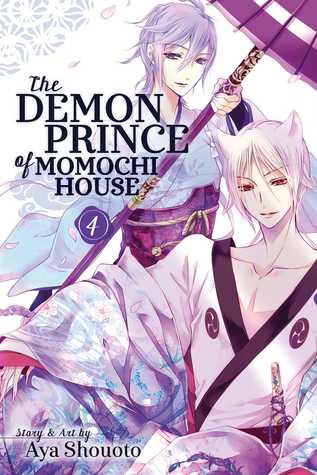 The Demon Prince of Momochi House, Vol. 4 by Aya Shouoto
My rating: 3.5 of 5 stars

This volume takes us back into Aoi’s backstory, with the boy from the end of the last volume turning out to be one of Aoi’s childhood friends, Hidaka, who belongs to a family that could see and control fox spirits in the past. Hidaka thinks he has been cursed by the fox spirits and that is why he can only finding a missing hole where Aoi’s memories should be. Himari, because she is in contact with Momochi house, and Hidaka, comes under the scrutiny of said fox spirit, who is out for causing trouble and pain. She, with some help from the Nue, resolve the issue, obviously, and the storyline gives an extra layer of characterization for the ayakashi in this series, and what they feel about their connection to humanity. Kasha makes another appearance to cause some havoc, and inadvertently advance the romantic subplot! On the last page, Yukari drops a ‘WTF Yukari’ kind of bombshell information, so I am interested in seeing what that means for the next volume.