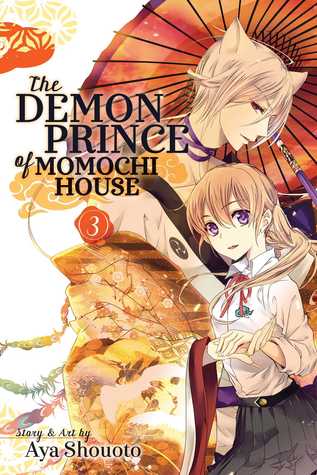 The Demon Prince of Momochi House, Vol. 3 by Aya Shouoto
My rating: 3.5 of 5 stars

Himari Momochi inherits Momochi House, an estate that exists on the barrier between the human and spiritual realms. Four friends come over to visit Himari, but Aoi can sense that one of them is no longer alive. This spirit is absorbing Momochi House’s power and is quickly transforming into a demon. Will Himari be able to stop its progression and save her friends?

This volume definitely got me more invested in the story, as more characters and elements of the magical side of things come into focus. First, it completes the story from the previous volume, where Himari had unknowingly invited a spirit into the house, where they could feed on the power and grow malevolent. While dealing with that, we are introduced to an antagonistic character, Kasha, who seems to have something against Nue, or at least likes to torment him. Himari’s peculiar abilities as the owner of the Momochi house come to the forefront as she helps resolve that. The latter half is then about an ayakashi banquet that Nue invites her to, which was aesthetically impressive in artwork. I am liking the intensifying dichotomy between Aoi and Nue being presented, and how Himari views them both. There’s also growing feelings between Aoi and Himari, and it is apparent in how the Nue reacts to her.

Previous books in the The Demon Prince of Momochi House series