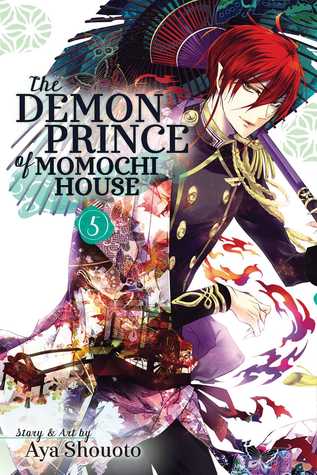 The Demon Prince of Momochi House, Vol. 5 by Aya Shouoto
My rating: 4 of 5 stars

Himari Momochi inherits Momochi House, an estate that exists on the barrier between the human and spiritual realms. The waters of the seven sacred falls have become polluted, and Himari, Aoi, and the shikigami cross over to the spiritual realm to find the cause. But during an attempt to purify the waters, Himari is taken away by the dragon god!

With Yukari’s shocking revelation in the last volume, I was wondering what this volume would bring, and yes, we do get his backstory here. In a way, I was relieved to know it wasn’t what I thought, but in another way, it was heart-breaking to learn how he was brought up, as a spy to infiltrate a court, and his betrayal thereafter. When all of them go to cool off in the summer to a hidden spring tended by Yukari, we also come across the dragon who is like a parent to him, and who has been affected by a curse. The dragon’s reasoning for giving him a life as an ayakashi was also quite heartening; I also loved the exploration of loneliness in humans as well as ayakashi, as well the differences in relationships.

The other arc was about Himari’s high school class doing a test of courage thing on a local haunted hill, but Himari inadvertently getting caught up in a curse along with Hidaka. At first, I thought it might be an over-the-top way to introduce a love triangle (especially since both Aoi and Himari have realized their feelings for the other), but the mystery of the curse turns out into a significant plot point that ties into something more threatening. I was a bit surprised by Himari taking initiative, too, and so far the relationships in this have been taking interesting turns.