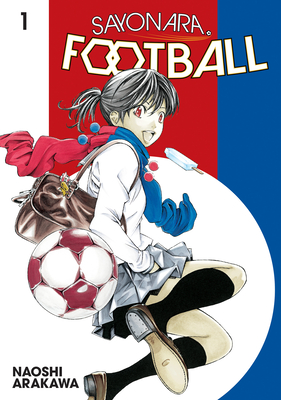 Sayonara, Football 1 by Naoshi Arakawa
My rating: 3.5of 5 stars

14-year-old Nozomi Onda has only one thing on her mind: playing beautiful football. There’s just one problem: no matter how much she longs to participate in official matches, she’d have physically superior boys as opponents. But when a boy from her past confronts her on the street, she decides she can’t wait any longer.

Warnings: a person is struck, blindfolded and bound

The story of Sayonara, Football is about a middle school girl who is awesome at football, but because her school doesn’t have a girls’ football team (and she tried creating one but not many girls were interested) she practices with the boys’ team, and yet she is never allowed to play in official matches. The manga opens with her getting past 5 of the team members, in an effort to convince the coach to let her onto the team, but despite everyone and their mother acknowledging she has skills for days, it all comes down to the fact that she is not a boy. Our girl Nozomi has to oft hear the same chant “boys are physically superior to you” and “you might get hurt” but like, she is really good, and motivated and even boys get hurt and so do girls in their matches so like most of the argument made me go ‘ugh, this again’. She is especially charged up to play in their upcoming official match against another school, because her childhood friend she used to mercilessly train *ahem*bully*ahem* has grown to be the star of that school’s team and basically threw down a gauntlet she can’t help but pick up. Obviously, she is going to go to some lengths to prove she is perfectly capable of playing in boys’ matches, but oh my god, what she did was further than I thought. The artwork is good, and with so many scenes primarily about on-the-field action, the storyboard is engaging and fast-paced. There are some romantic possibilities with at least two guys vying for her attention, but I hope we don’t get to that anytime soon. Overall, it is enjoyable even if you aren’t that into the game, and with such a dauntless protagonist, the story has lots of potential.