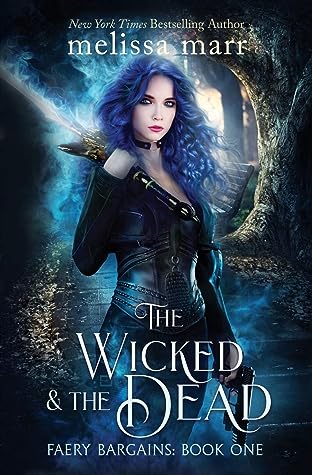 In near-future New Orleans, Draugar, again-walkers, are faster and stronger than most humans, but not venomous l until they are a century old. Until then, they shamble and bite. Since not everyone wants to see their relatives end up that way, Geneviève Crowe makes her living beheading the dead.

But now, her magic’s gone sideways, and the only person strong enough to help her is the one man who could tempt her to think about picket fences: Eli Stonecroft, a faery who chose to be a bar-owner in New Orleans rather than live in Elphame.

Then human businessmen start turning up as draugar.

Suddenly, the queen of the again-walkers and the wealthy son of one of the victims, both hire Geneviève to figure it out. She works to keep her magic in check, the dead from crawling out of their graves, and enough money for a future that might be a lot longer than she’d like. Neither her heart nor her life are safe now that she’s juggling a faery prince, murder, and magic.

“Marie might have been an angel in life, but right now she was a killer.
In my city.
If I found the person who decided to release Marie- or the woman with the syringe- I’d call the police. I tried to avoid killing the living. But if I found Marie, or others like her, I wasn’t calling dispatch. When It came to venomous killers, I tended to be more of a behead first, ask later kind of woman.”

I love Melissa Marr. I became a instant fan after reading one of her fairy series, Seven Black Diamond (which I highly recommend to check out) and she is just spectacular with her creative take on fae stories. Then in the early beginning of 2020 she announced that her new adult series was coming out and I couldn’t stop myself and immediately purchase it. How could I refuse myself? It’s an urban fantasy with a Jewish-Wiccan witch woman slaying the walking dead.

Genevieve Crowe is an interesting character, she is the textbook example of urban fantasy/paranormal lead who is magical and happens to be in the center of a mysterious case but what I didn’t expect is how the case will be so little in compression to what’s going on with her. Her powers that we suppose to know are getting out of control, her other biology is kicking in and she has no way of subduing it so what does she do? Going back home to her mother, learn a little bit more about herself, the bargain her mother made so she’d be safe and all the while deal with her fairy romantic love interest, Eli Stonecroft. I love seeing her vulnerability in not only from her struggling with her upbringing is a half witch half draguar (one of the dead she’s killing in her everyday life) but her friendships with her friends and partnership or more precisely her romantic attraction to Eli and how hard it is to confine in them. She has trust issues and walls and she think she can manage everything in her life but Jesse, her childhood friend or her brother as he calls it, constantly there to remind her that she doesn’t have to be alone and she can relay on him and her friends. Even her interaction with Eli which are so sweet are really thoughtful, they both want each other but they are too scared to commit to it. it such a slow pace romance I’m all here for.

But despite what I love, my problem lies with the mystery case and the world building of this story. I thought the murder mystery was actually compelling but its conclusion felt so out of nowhere for me. Genevieve did a lot of investigating but it feels so… rushed? I think that’s the word. As for Genevieve being a earth witch like her mother that was pretty interesting take on witches in an urban fantasy I’ve seen for a long time. As for the rising dead, the Draugar, they sound nothing like your typical undead corpses you consume in creative media. Reptilian like with vampire like tendencies but with barley any control over themselves sounds terrifying but it is also… confusing. Where did they come from? How is it possible for a hybrid like Genevieve to be around? Are there Human-Draguar hybrids out there? What about Fairy-Draguar? However, this is but the first book so why do I rattle on about, THE ANSWERS WOULD BE REVEALED IN THE NEXT BOOK~~~

Is it Diverse? Jewish-Pagan main lead.

One thought on “Book Review: The Wicked & The Dead By Melissa Marr”