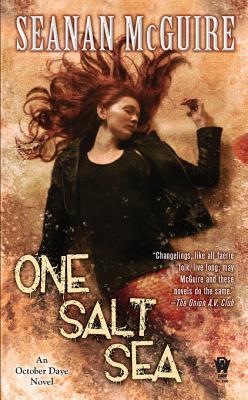 One Salt Sea by Seanan McGuire
My rating: 5 of 5 stars

October “Toby” Daye is settling into her new role as Countess of Goldengreen. She’s actually dating again, and she’s taken on Quentin as her squire. So, of course, it’s time for things to take a turn for the worse.

Someone has kidnapped the sons of the regent of the Undersea Duchy of Saltmist. To prevent a war between land and sea, Toby must find the missing boys and prove the Queen of the Mists was not behind their abduction. Toby’s search will take her from the streets of San Francisco to the lands beneath the waves, and her deadline is firm: she must find the boys in three days’ time, or all of the Mists will pay the price. But someone is determined to stop her-and whoever it is isn’t playing by Oberon’s Laws…

Toby has barely settled into her role as the Ducchess of Goldengreen, when the fae world is about to go into war thanks to tensions between the land and water fae. The children of the Queen of the Undersea have been kidnapped, and there is doubt cast on the Queen of Saltmist for having done the deed. At peace talks, the Undersea consort is attacked, which leads to further tensions. The Queen of the Undersea asks Toby to find her children, which firstly makes for a missing persons case, but where fae are concerned, there are more complications. With the Queen of Saltmist more eager for war than peace, Toby has a deadline of three days to find the kids, find who kidnapped the kids, and try to stop a war, not easy when signs point to someone deliberately stoking the tensions. And when Toby gets involved, her daughter is kidnapped.

The story takes us new places, metaphorical and literal as we see the Undersea and glimpse the working in that court and also get to dig into the Selkie mythology in this series. Her main ally in this quest is the Ludieag, who has her own motivations for preventing war, but for some reason has to distance herself from getting overtly involved in the matter; she, however, can use Toby like her champion to get through it, and yes, we do get a sort of mermaid Toby. Toby has already defeated two fae bigwigs at this point, so the challenge is not in the whodunnit, but how quickly she can uncover the culprit and save the kids, including her own. With fast-paced action, and new mythology, this book was really a delight to read, but it also delivers some gut punches.