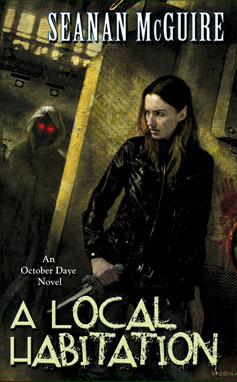 A Local Habitation by Seanan McGuire
My rating: 3.5 of 5 stars

Toby Daye-a half-human, half-fae changeling-has been an outsider from birth. After getting burned by both sides of her heritage, Toby has denied the fae world, retreating to a “normal” life. Unfortunately for her, the Faerie world had other ideas…

Now her liege, the Duke of the Shadowed Hills, has asked Toby to go to the Country of Tamed Lightening to make sure all is well with his niece, Countess January O’Leary. It seems like a simple enough assignment-until Toby discovers that someone has begun murdering people close to January, and that if the killer isn’t stopped, January may be the next victim.

While we know Toby’s abilities to read blood make for a useful skill when it comes to being a PI and solving murders, this book takes away that aspect of hers, partly making it more complex for her to solve the case, but also introducing us to more of the Faerie world. When Toby is asked by Sylvester to go investigate why his niece (and also the Countess of Tamed Lightning, a territory sitting between two warring ones) hasn’t been responding back to his communications, she thinks it is a simple case of checking in. As her re-entrance back into the Faerie world and his court is new, her presence at Tamed Lightning would not be seen as a political or diplomatic trip, and so the only backup she has is Quentin, the pureblood Daoine Sidhe knight-in-training, who is being sent along to shadow her. Having a teen tag-a-long would be interesting enough (she, with her 14 year tech gap, and he well-versed in modern tech) but when the danger turns real, she has to protect herself and her underage charge, against a mysterious serial killer who leaves behind no evidence.

I love how in the second book itself McGuire raises the stakes to have Toby’s blood reading skills rendered practically useless, as well as have a science fiction aspect to the storyline. The Countess, January (what is with the month names in this family?) has a tech company that is doing some cutting edge work, but a lot of it is secret, and seeing that part along with the regular Faerie magic was hella interesting. For starters, their AI is actually a dryad who was transferred to a digital interface, and most of the Fae working for January are programmers and such. Toby doesn’t understand much of what they are talking about obviously (she can barely use a cellphone), and further more, she can’t parse the relationships within the company well enough to dig into what is going on. Her only ally is Quentin, but he is a child and this is practically his first rodeo, so it is a hell of a lot to put on a kid, who is also quite adamant about being helpful. I loved their dynamic so much, with her being like a much older sister who has to deal with an earnest teen. The Faeries we meet in this book, too, are quite varied, included one very interesting example of a shape-changer.

I can’t say much about the murder mystery itself, but having the night haunts so prominent in the storyline was something I didn’t expect from the second book, so I was delighted that the book dug more into their mythology. I must say, though, the actual mystery was a bit tiresome in that nothing much happens for the most part. Toby and Quentin walk around, discover a body, check it out, everybody regroups, thinks who it could be, then again another body is found, rinse and repeat. It takes much time to even get into one of the victim’s shady dealings, which could have introduced a red herring much earlier in the story. Most of the action was in the last quarter, and while it was a nice bit of story, I didn’t find the mystery wholly satisfying. The narrator, Mary Robinette Kowal, does a good job, as before, with Toby and the other femme characters, though the male characters do sort of sound the same for the most part (I distinguish them by their accents).

Overall, while this sequel takes chances with its setting and stakes and does well on those fronts, the mystery itself is underwhelming.

2 thoughts on “Audiobook Review: A Local Habitation by Seanan McGuire”