OMG it has been A While! The last post was nearly 5 months ago, and yes, my podcast listening had gone down in all this time, with me focusing more on audiobooks. But now I am back (probably)! I am trying to catch up show by show, instead of a couple of episodes of each. 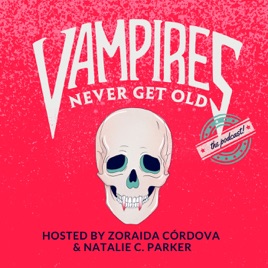 “You know the old adage: Vampires Never Get Old. At least, that’s our adage. Vampires Never Get Old: Tales With Fresh Bite is an anthology forthcoming from Imprint/Macmillan on September 22, 2020. The anthology includes stories by authors both bestselling and acclaimed, including Samira Ahmed, Dhonielle Clayton, Zoraida Córdova and Natalie C. Parker, Tessa Gratton, Heidi Heilig, Julie Murphy, Mark Oshiro, Rebecca Roanhorse, Laura Ruby, Victoria “V. E.” Schwab, and Kayla Whaley. Our podcast aims to dig deep into the immortal creatures of the night we love. Each episode will focus on a classic vampire novel or character, as well as feature the contributing authors as guests! Welcome. You’re invited in.“

Okay normally I don’t do talk-show style podcasts but this is (a) by my favorite authors, (b) discusses YA vampire lit, including from pre-Twilight, so I was interested. So far I only listened to the first episode and it was quite entertaining to listen to Cordova and Parker discuss this absolute gem of wacky vampire lit! I am not sure if I do want to read ‘The Silver Kiss’ though *thinking pose*

“Every city has its secrets that it keeps under lock and key — and that’s why Quanyii, Witch of the Wastes, has no interest in those. If every city has them, they’re not exactly special, are they? The big secrets though — those are a little more hidden. Like… two locks and two keys. And Quanyii has one secret of the Second Citadel just like that that he wants. All he needs is an accomplice. Oh, hello, little girl. Do you have a minute? “

After having ditched the trio, Olala is looking for a way to get to the Citadel and meet with the Queen, but guess who would come across her? (I also may have screamed a little because Quanyii uses monster parts so uhhhhhh)

“A whisper from the darkness: “One good turn deserves another, and so I’ll give you two; Allow me this one favor and I’ll do its twin for you.””

As Olala and Quanyii infiltrate the Second Citadel to get to the vault for a particular amulet, Olala ends up freeing a terrifying monster. I was pretty much on the edge of my seat during this episode, and it was also so scary!

“WANTED: Six members of newly-established Aurinko Crime Family. Though we are unclear on their capabilities, suspects should be treated as if they are ARMED and DANGEROUS. Current location unknown. Those with information leading to the capture of the suspects should immediately contact [REDACTED]”

I LOVE THAT NAME! And you know why I love that name? Because it is awesome and guess who named it? Rita! So what happens is the Family is stranded on a planet, and Rita decides to make the most of it, and complete their mission to get the book anyway, but instead of the six of them being there physically, she makes three bots for her, Juno and Peter (of course these two would agree to be part of her schemes) by which they can remotely access the vault where the Book is stored. Unfortunately, Rita’s changes to the bot from Dark Matters had unintended consequences!

“LAST TIME ON “RITA AND THE MEGA-ULTRABOTS OF CYBERJUSTICE”: when the nefarious agents of DARK MATTERS assault a facility for housing INNOCENT CRIMINAL ROBOTS, it’s up to BEAUTIFUL HEROINE RITA and TWO OTHER PEOPLE I GUESS to save the day! Will our plucky heroine save the day? Will her compatriots forgive her for doing that thing she definitely wasn’t supposed to do? Find out… on “RITA AND THE MEGA-ULTRABOTS OF CYBERJUSTICE!””

This being a Rita-centric arc, it is full of Shenanigans. Starting from the design of the bots for maximum awesomeness to the three of them delivering a heck lot of chemistry and entertainment as they bicker with each other throughout, the episode was a hoot!

“Milltown. The darkest night, when villains walk freely to spread their evil in the cover of shadow. In this cursed land, at this cursed time, is there no one who will take a stand for Truth, Justice, and the Citadel way?Put on your masks. Tonight, justice hides his face.”

Olala is in the Citadel prisons while Queen Mira, Sir Caroline and Sir Absolon are deliberating what to do with her. They definitely don’t want to hand over her to the Kite dude, but their reasons for it are different. Combined with the fact that Olala seems to feature in some old prophecy, and something like her (or maybe her herself) was said to be the cause of the fall of the First Citadel, they are all leaning towards protecting her. (Also Caroline, she’s a child! Even if that Jack monster thing gave me pause) Which means its time for Himbo Knight Sir Angelo!

“Love is, of course, the most heroic emotion — but only if you’re a hero while you’re feeling it. If you’re evil it’s just… icky? Has anyone checked if evil people can feel love? Regardless: love and justice are exactly what’s in store for the Vigilant He tonight, as he attempts to save Milltown from its masked captor once and for all!”

Angelo goes to face the Kite alone in an undercover persona (but come one, does this man know the  meaning of stealth?) and finds another awesome swordsman, Ale, (who he misgenders at the start btw), who he starts flirting with. There is some questioning of sexuality (come on, have all the knights be gay!), but there is a lot of rescuing and fighting evil going on. Only thing? Angelo may have gotten into more trouble than he intended, and so does Olala.