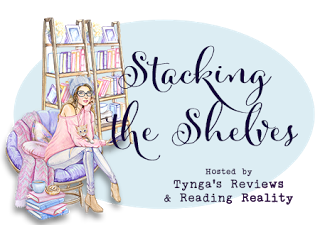 Stacking the Shelves is a weekly haul meme hosted by Tynga’s Reviews & Reading Reality. It is about sharing enthusiasm for the new books added to our shelves – be it physical, ebooks, galleys or borrowed from the library.

Though this is a weekly haul meme, *I* will be doing this fortnightly

More than half of them are just VIZ Media galleys lol.

“After witnessing the brutal murder of her mother by witch-hunters, Evey vows to avenge her and track down the killers. Fury burns in her bright and strong. But she has promised her mother that she will keep Dill, her little sister, safe. As the lust for blood and retribution rises to fever pitch, will Evey keep true to the bonds of sisterhood and to the magick that is her destiny?“

“The day Fatima forgot her name, Death paid a visit. From hereon in she would be known as Sankofa­­–a name that meant nothing to anyone but her, the only tie to her family and her past.Her touch is death, and with a glance a town can fall. And she walks–alone, except for her fox companion–searching for the object that came from the sky and gave itself to her when the meteors fell and when she was yet unchanged; searching for answers.But is there a greater purpose for Sankofa, now that Death is her constant companion?”

Fly Me to the Moon, Vol 1 by Patricia Ratto

“From the day his parents named him, Nasa Yuzaki has been destined for outer space…or so he believes. But while trying to join the space program, he is thrown for a loop when an accident introduces him to Tsukasa, a mysterious girl with strange powers. Is she an alien, a moon goddess or something else? Since she insists on marrying him, Nasa has plenty of chances to find out!“

A comic strip about a romance between a werewolf and a vampire? of course I would read it immediately. Click through the cover image for my review!

She’s Too Pretty to Burn by Wendy Heard

“Inspired by The Picture of Dorian Gray, this sexy psychological thriller explores the intersections of love, art, power and violence.“ Say no more.

The Seventh Perfection by Daniel Polansky

I remember seeing this cover a couple of months back (most probably on the artist’s Twitter itself) and was intrigued. “To become the God-King’s Amanuensis, Manet had to master all seven perfections, developing her body and mind to the peak of human performance. She remembers everything that has happened to her, in absolute clarity, a gift that will surely drive her mad. But before she goes, Manet must unravel a secret which threatens not only the carefully prepared myths of the God-King’s ascent, but her own identity and the nature of truth itself.“

The Fourth Island by Sarah Tolmie

“Huddled in the sea off the coast of Ireland is a fourth Aran Island, a secret island peopled by the lost, findable only in moments of despair. Whether drowned at sea, trampled by the counter-reformation, or exiled for clinging to the dead, no outsiders reach the island without giving in to dark emotion.“

Venus in the Blind Spot by Junji Ito

A collection of his horror manga; find my review through the cover image.

Ophelia After All by Racquel Marie

This is how the book is described:

Lost in the Never Woods by Aiden Thomas

From the synopsis it sounds like a Peter Pan retelling, and with a queer author, I am eager to see more queer retellings.

What new books have you added to your shelves? Any of these you excited for?

One thought on “Stacking The Shelves #101”