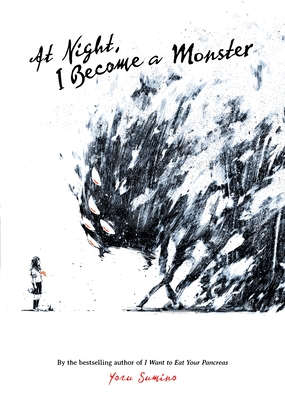 At Night, I Become a Monster by Yoru Sumino
My rating: 4.5 of 5 stars

By day, Adachi is a normal student. By night, he’s a terrifying creature of many eyes and many legs who lurks in the darkness. One night, while haunting his own school, he comes across his classmate Yano Satsuki–she’s been an unexpected victim of bullying, and stalking the night in her own way. He’s surprised to find himself developing a sympathetic relationship with her. In this supernatural novel about nighttime outcasts, two students confront the monstrous ways that humans can treat each other.

This fabulistic novel about a middle-school boy who turns into a monster at night, and meets his bullied classmate is an exploration of the mindset of bullying from a different angle. Adachi doesn’t know why he turns into a monster a night, only that he has been doing so for a few weeks now, and he has sort of now settled into a routine. One night, he decides to sneak into his school to retrieve the homework he had forgotten, and comes across Yano, his classmate who is being bullied by everyone in the class for harassing one of the classmates. Though it has been sometime from the incident that turned the class against her, Yano is still tormented by some of the more aggressive members of the class, and ignored by the rest. Even them ignoring her, however, is not without malice, and it is a deliberate shutting out from their ‘class unity’, a thing which Adachi himself participates in, even if he doesn’t explicitly bully her the others.

“This empty, open school at night was probably the only place where she could breathe freely. Suddenly, I felt like for the first time, I truly understood what she meant by ‘midnight break’.”

At the start, he feels she brought this treatment upon herself, aside from the incident, with her manner of speech and a smiling countenance that doesn’t change whatever the situation is, and her lack of awareness in reading the room. It is quite possible she is neuroatypical, with her different speech pattern and misunderstanding of social cues, but Adachi doesn’t realize that. However, as he gets to know her at school at night, there is a different side of him that feels a bit for her, and even starts to be protective about her, when her presence at school might be discovered by some other classmates. However, he keeps being the same during the day – which makes for a dichotomy in his behavior to her, a behavior she doesn’t question him on, just tells him to not bring the discussion of daytime into nighttime. The building up of their friendship is done very subtly and Adachi’s realization is also approached in a nuanced manner. On one hand, he is avoiding making any waves during daytime in the name of self-preservation, but his friendship with her in his monster form doesn’t mean anything if he can’t stand by during the daytime too. The class dynamics, and the bullying and him realizing that following the herd is not always the right thing to do – it is portrayed and explored so well; it also gives the message that intentions without action mean nothing.

“When I was a human, I felt closed in. Not by walls, or ceilings, but by people’s sense of justice, their ill intent, and their shared sense of unity.”

Though the ending leaves it open-ended as to how the bullying at the school will go on, the last line leaves such an impact on the supernatural aspect of the story, explaining everything in one stroke, and making the monster transformation more meaningful. Tackling the essence of which self of yours is true is also a coming of age moment for the protagonist of this novel. The book, while slow to present itself in the start, builds slowly into a splendid story.

One thought on “ARC Review: At Night, I Become a Monster by Yoru Sumino”