Welcome to my stop on the blog tour for Witches of Ash and Ruin! 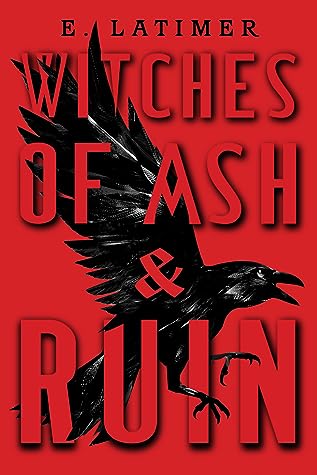 Modern witchcraft blends with ancient Celtic mythology in an epic clash of witches and gods, perfect for fans of V.E. Schwab’s Shades of Magic trilogy and A DISCOVERY OF WITCHES.
Seventeen-year-old Dayna Walsh is struggling to cope with her somatic OCD; the aftermath of being outed as bisexual in her conservative Irish town; and the return of her long-absent mother, who barely seems like a parent. But all that really matters to her is ascending and finally, finally becoming a full witch-plans that are complicated when another coven, rumored to have a sordid history with black magic, arrives in town with premonitions of death. Dayna immediately finds herself at odds with the bewitchingly frustrating Meiner King, the granddaughter of their coven leader.
And then a witch turns up murdered at a local sacred site, along with the blood symbol of the Butcher of Manchester-an infamous serial killer whose trail has long gone cold. The killer’s motives are enmeshed in a complex web of witches and gods, and Dayna and Meiner soon find themselves at the center of it all. If they don’t stop the Butcher, one of them will be next.
With razor-sharp prose and achingly real characters, E. Latimer crafts a sweeping, mesmerizing story of dark magic and brutal mythology set against a backdrop of contemporary Ireland that’s impossible to put down.

Witches and a serial killer plot with a witch hunter? I was obviously excited as it combined two of my favorite things in a contemporary setting – supernatural stuff and mystery! Set in a small village in Ireland called Carman, the story takes an interesting twist on the witch hunter trope, where the hunter is not hunting down the witches out of, you know, the whole ‘can’t allow a witch to live’ but for some other arcane reason. Dayna has lived in Carman with her pastor father, but she is a novice of the local witch coven, which her best friend Reagan and her mother Yemi are also a part of; she has recently been outed as bisexual to the community of church-goers and her relationship with her father and her ex-boyfriend Samuel have been affected. When the first witch death happens in town, Meiner and her coven (consisting of her grandmother, the infamous King witch, and her ex-gf Cora) arrive to help suss out what is happening and who is killing witches. The regular folks think the deaths are part of the pattern of a serial killer, the Butcher, who kills six women every decade, and Samuel, a true crime buff has been following up on the case.

“The best way to hunt a witch was to look for patterns of three. Three stones set into a wild, overgrown path. Three chimneys sending twisting ribbons of smoke into a clear sky. Three gates before the inner sanctuary— each more heavily spelled than the last. Find the house of threes, and you’d find the coven.”

The book has PoV chapters from Dayna, Meiner, Cora, Samuel, and Dubh, who is the Butcher (it’s not a spoiler; his is literally the first chapter). While the witches are trying to figure out the killer’s motive and patterns and how they identify the witches, Dubh is keeping his eye on them while hunting down other witches. He and his brothers are in a cycle, trying to unearth something, and the plot slowly reveals to us, in bits and pieces, what their true objective is. Meanwhile, Dayna’s coven is preparing for her and Reagan to ascend; Dayna is also having to contend with the return of her mother from a church camp where she has been for the last several years and she suspects her father is abusing her mother. Cora and Meiner are locked in a competition to prove their worth to Meiner’s grandmother. The King witch, taking advantage of this competition, lures Cora into practicing black magic to gain more power.

“Smile, beautiful. Your face is too perfect to scowl at a bloke like that.”
Cora’s mouth was still filled with the copper-and-rust taste of blood. Her teeth felt coated in it, as if the gore had stuck in the cracks. She smiled. The boy’s smirk faltered.

The overall tone of the story feels a lot like a serial killer thriller, and the covens are trying to find the who and the why, even if we as the readers know. The specific threat of the situation permeates the atmosphere of the book, and it is accompanied by the general threat the witches face living under the radar in a church-going community. Dayna’s life as a queer witch are also an important part of her relationships, and a big reason of why she loves her coven so much; and watching her coven’s bonds with each other was so good, especially contrasted with how Meiner’s grandma runs her coven. When Meiner and her first meet, they both rub each other the wrong way, but there’s also a spark of attraction, so it is a little like a hate-to-love romance, and where Cora, the ex, is trying to win Meiner back, as is Samuel with Dayna. The book splendidly balances all these subplots – the mystery, the romance, the magic and the setting – to give an atmospheric and exciting story.

Received an advance reader copy for this blog tour

E. Latimer is a fantasy writer from Victoria, BC. Her middle grade novel, The Strange and Deadly Portraits of Bryony Gray was published by Tundra Books, and was recently nominated for the Red Maple Fiction Award.
In her spare time, she writes books, makes silly vlogs with the Word Nerds about writing, and reads excessively.
Her latest novel, Witches of Ash and Ruin, will be released Spring/Summer 2020 from Little, Brown Books for Young Readers