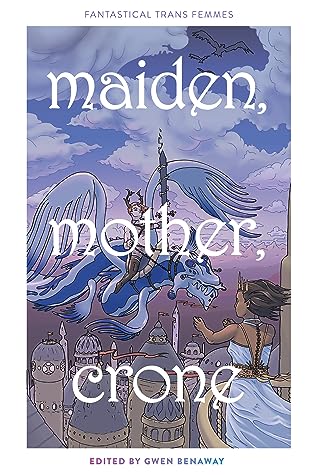 Drawing on high fantasy and other genres of fantasy writing, Maiden, Mother, Crone is the first anthology by trans femme authors to explore the realms of magic, supernatural beings, and alternate universes. Enter a universe of wonder where trans femmes are powerful heroines, sorceresses, and warriors fighting against dark forces in vivid magical worlds.

With celebrated trans femme writers like Kai Cheng Thom, Casey Plett, and Gwen Benaway, and featuring art by Alex Morris, this anthology will transform the landscape of fantasy fiction and offer radical portals into excitement, danger, and transformation.

This anthology of fantasy stories, all involving trans women characters, is a fantastic collection of tales, in which the women all have different roles and varied outlooks. There are stories about women fighters and healers, witches and angels, there are stories about mothers to a child, and mothers to a community. A few of these stories have DnD themes, like the one involving an all-female group that is on a rescue mission to save a witch, or the one about a traveling mage and her lover who go across the kingdom as mercenaries. A couple of the stories I did not understand, like the one about an Outlier witch, and some didn’t have enough of a background of the setting to understand the story well.

My favorite was The Knighting which presented an interesting discussion about gender identity and gendered titles. The story is about a physician who is a transwoman and who follows her mentor (another trans woman) in how to express her femininity; when she is going to be knighted for her contributions on the battlefield, she has reservations, and a (cis) female knight has a discussion with her about the title of ‘Sir’ and its gendered implications that she and other female knights are trying to get rid of by hoping more women being knighted. Another was Undoing Vampirism because it gave a twist to the term ‘live your truth’. Dreamborn was heart-breaking in its exploration of colonialist violence.

Overall, it is an engaging and well put together set of stories.

Received an advance reader copy in exchange for a fair review from Bedside Press, via Edelweiss.