I started Attention Hellmart Shoppers and Spirits but neither of them really got me invested. I am thinking of starting The Passenger List next… 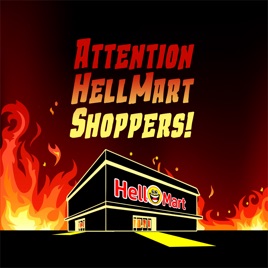 “Attention HellMart Shoppers! is a twice monthly horror/comedy audio-drama. Join the staff of HelloMart, a big box super-store built on top of the gates of hell, as they battle the forces of evil in order to bring you the best customer service minimum wage can provide.”

I’m on the fence about this show TBH. I was keeping it for a while, thinking that it was a really funny comedy podcast but so far it has failed to impress.

“Daniel Richmond was living the good life in the elite world of New York finance when he took the fall for his firm’s dirty dealings. Now he’s out of jail on work release and he has to figure out how to make it at HelloMart, a big box store in the middle of nowhere, unfortunately built on top of the buried gates of hell. After alienating his fellow employees, his boss, and possibly a serial killer he’s still not sure what’s worse; The supernatural threats or the customers.”

So rich white guy gets caught in fraud, goes to jail, and is now given a retail job as his work release. The idea of a retail store also being a hellmouth would be on point and serve a lot of laughs, but the sound quality of the show is *shudder*. The voice acting is also terrible and overdone, or underdone (as in the case of that robotic sounding female employee Daniel is crushing on).

“Daniel has an unfortunate phone conversation and spills a little blood. He may or may not find those shoelaces.”

I already wasn’t impressed with the first episode, but I thought I will do the second since, well, it would complete a story. But I don’t know who half these characters are, can’t differentiate between them, and the voice acting is awful anyway. But the cherry on my frustration cake was when one employee jokingly tells Daniel that he should essentially sexually assault her, so NOT COOL, guys, not cool….

“A boozy weekly podcast about mythology, legends and folklore. Hear fresh takes on classic myths and learn new stories from around the world, served up over ice by two tipsy history geeks.”

“The first episode of Spirits introduces you to the ancient Greek gods with the story of Hades and Persephone. Find out why marrying siblings wasn’t weird, hear what Hades was really like, and get tips on naming your dog straight from ancient Greece.”

It hardly touches on the myth and the various interpretations of it. For someone new to it, I guess it would be entertaining.

“This week on Spirits, two very different kinds of creatures from the deep: Selkies and Kelpies. There’s mischief, rumors, sexual intrigue… Only the best for you, dear listeners!”

Again, very surface info like. Only them going into the reasoning of the myths probably saved this episode a bit for me.

Get rid of cursed objects ASAP seems to be the running theme. Quite gruesome episode.

“Case #0092302. Statement Of Keiran Woodward regarding items recovered from the refuse of 93 Lancaster Rd. Walthamstowe.”

OMG this was so creepy. Things appearing in garbage bags, and things that escalate from doll heads to teeth. *shivers*

“Case #0140912. Statement of Timothy Hodge regarding his sexual encounter with Harriet Lee and her subsequent death”

Well that was one heck of an STD! And goodness this was so scary because dark rooms + not turning on lights + inexplicable horrors is a recipe for nightmares

“Case #9220611. Statement of Staff Sgt. Clarence Berry regarding his time serving with Wilfred Owen in the great war.”

This was chilling, about a being that is fueling a war.

“Case #0071304. Statement of Evo Lensik regarding his experiences during the construction of a house on hilltop road Oxford.”

Okay empty houses are always scary, and empty houses under constructions? Where their bones are exposed, metaphorically and literally? Nightmare fuel.

“Case #0020312. Statement of Julia Montork regarding the actions and motivations of her father the serial killer Robert Montork.”

Chilling both in the human sense and the supernatural sense.

“Case #0100710. Statement of Trevor Herbert, regarding his life as a self-proclaimed vampire hunter.”

Probably the first that wasn’t directly about a haunting or a cursed object, but instead about creature lore!

Freya goes off on Sigrid, and more on the Cradle for how they treated the visitor Jure, Freya sent them.

The Cradle’s sister society had defended against the Society in a raid, and Freya has written a book on how to make and run secret communes like the Cradle.

“Spring 1997 – SIDE A: Motherhood is difficult, Sigrid. SIDE B: A sermon for The Cradle”

Freya seems to be missing all the homes she has made in the various communes. And she seems to be all fired about a transgression of her teachings. I am starting to get scared of what Freya might do, especially after the sermon.

“Sammy & Ben find out about not-so hidden messages going out on-air and catch up with the 2011 Salesman of The Year.”

I was so happy to hear RON again I may have screamed! Even so, the filler quality of these episodes can’t be distracted from – it is obvious that things are being stalled for the sake of episode 100. In this, the boys discover that their ads are being hijacked by the Science Institute. More surprising to me was the fact that Ron listens to Doyle’s Conspiracy Cavern (I won’t believe he listens to it sober, nuh uh)

“There may have been a few consequences from our attempt to live forever. Oops.”

Night vale citizens are under attack from the future, and they have to devise strategies, gather their forces, etc to defeat the robot army that is being fueled by their own future brains. Was the ending a bit easy? Yep!

Episode 3 – Cruising Out of Sight

“Dr Seabrooke intervenes in a selkie-human relationship, helps a shapeshifter with identity issues, and talks through an invisible man’s cruising problems.”

This was an amazing episode and brought up the question of consent in both queries. Firstly, I must say I love how the selkie tradition was subverted in this! So selkie stories – the female selkie stories – are usually rooted in domestic violence; the selkie can’t leave her husband because she isn’t free to do so. So, in this modern take, a selkie and his boyfriend can’t agree on the terms of their engagement – he wants to give his pelt to him, but his boyfriend won’t accept (because he sees it as taking his freedom from him). Dr Seabrooke gives an interesting solution to their problem!

The second query was about a voyeur, who can turn invisible, who is having trouble understanding his exhibitionist lover’s behavior, as well as has concerns about an encounter he had where he felt proper consent wasn’t given. What I liked is how Dr Seabrooke made the situation a teachable moment, rather than making the person one.

“In a quiet breeze amidst red leaves, Fate deals a new hand. Welcome to the Penumbra, dear Traveler. We hope you enjoy your stay.”

I have had Olala for only an hour and I would defend her with my life!

So the story takes place at a nunnery in the Western Wastes where a group of warrior nuns (!!!) have an unusual child in their midst.

“Desiree, Janelle, and Kalila are interviewed for a local news station. Gloria confronts Gabrielle on her controversial involvement in city politics. “

Shadow once again takes over Kalila at a crucial moment, to deliver a dire proclamation unto the citizens of Brushland. Meanwhile, Gloria finds Gabrielle’s secret and discovers that the problem is bigger than just the gods leaving them. I like how the episode draws parallels between the current migrant situation, particularly here as they draw inspiration from the protests, and movements against ICE.

“The city of Brushland finds itself at the mercy of an old war.”

While Una expands on Brushland, Finvarra collects Kalila and the changelings for a ‘viewing party’. However, with the Shadow of Brushland having made preparations, Southside gets caught up in a stalemate.

“The citizens of Southside begin to understand the many consequences of the Liminal.”

As Southside people decide how to resolve the issue, some changelings are willing to risk the unknown for a chance at freedom. Meanwhile, a call to the gods gets them an interesting ally. (Honestly, I was waiting for her to show up sometime!)