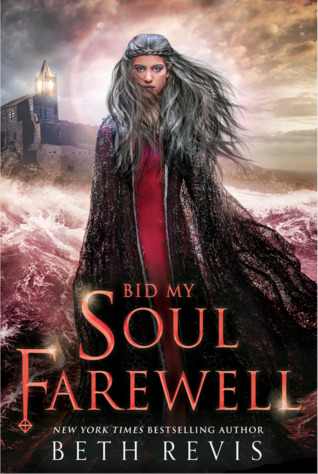 Bid My Soul Farewell by Beth Revis
My rating: 3.5 of 5 stars

Alchemy student turned necromancer Nedra Brysstain has made a life-changing decision to embrace the darkness–but can the boy who loves her bring her back to the light before she pays the ultimate price?

Lunar Island is trying to heal. The necromantic plague that ravaged the land has been eradicated, and Emperor Auguste, the young and charming leader of the Allyrian Empire, has a plan: rid the island of necromancy once and for all. Though Greggori “Grey” Astor wants what’s best for his people, he knows that allying himself with Auguste threatens the one person he loves most: necromancer Nedra Brysstain. Feeling like he already failed to save Nedra once, Grey becomes determined to help the Emperor rebuild Lunar Island while still keeping Nedra safe from harm.

Back at the quarantine hospital, Nedra’s army of revenants are growing increasingly inhuman by the day. Wracked with guilt for imprisoning their souls, Nedra vows to discover a way to free the dead while still keeping her sister by her side.

But, still reeling from the trauma of the plague, the people of Lunar Island are looking for someone to blame, and Grey can only protect Nedra for so long. And when Nedra and Grey are thrust into a battle with an even more terrifying adversary, Nedra will be pushed to the darkest depths of her necromantic powers. But can Grey let her go that far?

After Nedra defeats the necromancer-introduced plague, she doesn’t let go of her undead army, instead retreating back to the hospital as a home base, while she tries to find a way to bring her sister back. Binding her soul back to her sister’s body becomes her primary objective, and though she feels for the other undead, and keeps them to give them more time with their family, they are also her protection against the expected attacks from the Empire. Meanwhile, the people of Lunar Island, exhausted from the plague and under the Emperor’s direct rule again, have to rebuild, and Grey thinks that helping Auguste revive the economy would be the way to make a difference in the long term. Additionally, he also hopes by helping and earning the Emperor’s goodwill, he will be able to save Nedra from being punished for practicing necromancy, which is a capital crime.

The overall feel of the book doesn’t lend itself to a story in by itself – it feels like an extension of the ending of the previous one. While we get Nedra and Grey traveling to the mainland together for their own respective missions, it didn’t feel like that subplot stood on its own. Nedra’s attempts to get more necromancy books ties in with the resistance, but even the latter are barely a footnote in the plot, and mainly serve to tie up the ending somewhat. Similarly, Grey’s efforts to establish trade for the North feel hollow by the end, when things change drastically. So in terms of world-building, the novel didn’t offer much even though we get to see more of the world.

Where this book excelled, though, was in exploring Nedra’s story arc again. She has a complicated relationship with Grey because of the necromancy thing standing between them, and here they also have some progress in their relationship and conflict arising from it. Nedra’s other relationship – the one with her sister – gets its due with this book; she has a hard time letting go of her sister’s death, and her attempts to save her and make her like before is such an intense driving force for her story, giving her arc that of an anti-hero. There is one moment where she thinks she can let go, and I feel that point of the story was done so well in exploring how she was burdened by the weight of so many souls on her. She isn’t really involved in the politics of the world, but helplessly tied into it because of her necromancy, and it was fascinating to have a character arc that is so indirectly tied into the world yet so directly affected by it. Grey’s storyline, once again, doesn’t impress much, but his PoV does give a bit more insight this time around, so it was justified to have him be the other main character.

So, while I found the world lacking in this novel, I did feel that Nedra’s character arc got a good storyline and a conclusion that was satisfactory.

Is it diverse? Main character is an amputee

Previous books in the Give the Dark My Love duology