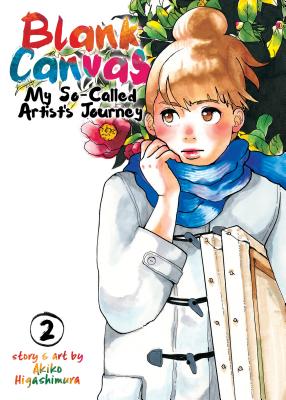 The award-winning autobiographical manga Kakukaku Shikajika by Akiko Higashimura, the creator of Princess Jellyfish, about her high school dream to become a comic book creator!

High schooler Akiko has big plans to become a popular mangaka before she even graduates, but she needs to get much better at drawing if she ever wants to reach her goal. Looking for an easy fix, she signs up for an art class, thinking all her problems will soon be solved. She’s in for a surprise: her new instructor is a sword-wielding taskmaster who doesn’t care about manga one bit. But maybe this unconventional art teacher is just what she needs to realize her dreams!

Taking the first steps into adult life can be confusing, and the author nails that college experience well in this second volume of her autobiographical series. A teen Akiko finally gets into an art college, in Kanazawa, but while she has been preparing for a new life, she has left things unsaid in her older one. She still hasn’t told her teacher why she wants to be in art school, and it weighs on her, because she think he might think less of her. In college, things are harder than she had been prepared for – where she could paint easily back home when she was preparing for the exams and stuff, she finds herself unable to do so in college, making her academic life suffer. Instead she, like many kids, decides to blow off steam, enjoy the time and run away from problems. She gets caught up in the new experiences – the first snow for someone from a warmer climate, the fashion sales, the freedom to do what you want, etc – and neglects her work. A return home reinforces her belief that she can’t paint while at school, and later when her teacher visits her at her university, she lashes out from guilt. The tone of the story is humorous, and at times, regretful as she looks upon the mistakes of her past, and how much she missed out on by virtue of being young and not knowing better. It is such a relatable experience!