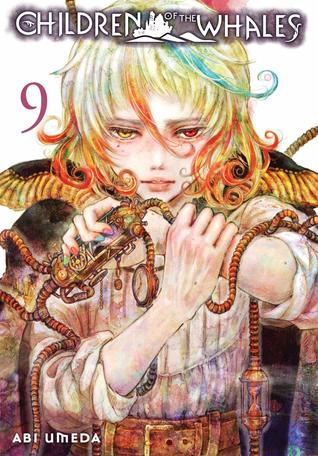 Children of the Whales, Vol. 9 by Abi Umeda
My rating: 4 of 5 stars

The Mud Whale has finally reached the shores of Amonlogia, but it quickly becomes clear that Sir Rochalízo wasn’t being entirely up-front when he said the people of the Mud Whale would all be welcome. His father the duke has placed harsh conditions on their citizenship, and they only have three days to agree…or face the consequences!

Well the other shoe just dropped! Having reached Amonlogia, the people of the Mud Whale are eager to settle down on proper land, even if they are surprised by how the port looks. However, only the Unmarked are allowed to disembark at first, to go discuss with the Duke (Rochalizo’s father) regarding their stay. The terms are harsher than they expected, though, and is against everything they sailed forth for. Rochalizo’s shadiness comes out as they try to force their hand, but Shuan had foreseen something like this and came along. Still, they are in a difficult place, with the two Mole twins trying to stir the Marked to abandon the Unmarked and just sail away from the conditions imposed on them. Chakuro, Ouni and Lykos each try to mitigate the situation by acting alone.

This volume brings in a host of new characters, like Rochalizo’s older brothers, one of whom takes a fancy to Suou thinking he is a girl. It was humorous for a bit, but all three of them basically pouncing on him – eh…. Anyway, the humor is hardly enough to balance out the shock, and violence in this arc. Once again, they are being persecuted just for being what they are, and being their ancestors’ descendants. Amidst this tension, we already know Orca is on the way, so I am a little nervous about how it is going to all play out.