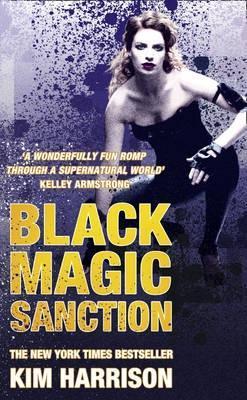 Black Magic Sanction by Kim Harrison
My rating: 4 of 5 stars

Rachel Morgan has fought and hunted vampires, werewolves, banshees, demons, and other supernatural dangers as both witch and bounty hunter – and lived to tell the tale. But she’s never faced off against her own kind…until now.

Denounced and shunned for dealing with demons and black magic, Rachel’s best hope is life imprisonment – the worst, a forced lobotomy and genetic slavery. Only her enemies are strong enough to help her win her freedom, but trust comes hard when it hinges on the unscrupulous tycoon Trent Kalamack, the demon Algaliarept, and an ex-boyfriend turned thief.

It takes a witch to catch a witch, but survival bears a heavy price.

Black Magic Sanction has Rachel under another death threat (again) as the Coven of Moral and Ethical Standards have put out a hit on her. Not satisfied with her shunning, they are after Rachel to neutralize the threat she possesses as a genetic demon. Trying to survive, while also trying to stay out of their clutches is a hard task, and the whole of Reality is unsafe for her, especially when she is facing up against witches who are more proficient in magic than her. This book is dark, and Rachel has to question a lot of stuff she has already been on the fence about, about morality and magic, and everything that comes in between.

Rachel being pursued by the Coven means that she cannot resort to black magic, because that would just hurt her case, but when the barriers she come across force her to take no other way, she has to resort to black magic or her demon abilities to survive. Her stay at Alcatraz was a particularly bleak one, and it gave a glimpse of how the Coven self-governs. Until now, the I.S. was the main pain in her backside, but with the Coven she is left without other allies, as they work to distance the other Inderlander species from her. Her only allies are Ivy, Jenks and his family and Pierce, who has been sent by Al as her bodyguard. Even so, with her having Al’s summoning name, and many people who know it, she is under threat as she is vulnerable to being summoned in a circle and thus captured. Al, for his part, is more affectionate towards Rachel in this book (at least what passes for affection in the Ever After) but he being who he is, he is never truly an ally to her. Trent, once again, makes an appearance to capitalize on her hard circumstances, and she is being surrounded on all sides by people who want to control her or strip her of her autonomy.

A big theme in this book was the question of morality and how the magic of the witches has been subscribing to a particular model for ages. White vs black was a delineation that was created to show which magic harms and which doesn’t, but it never accounts for how that is used. And black/demon magic that alters reality, thereby accumulating smut on one’s soul, is only a measure of the imbalance to nature that person has caused, and is not necessarily an indication that they are evil. Rachel herself has subscribed to those beliefs, justifying that even if she did black magic, the cause was good. But seeing the way the Coven weaponize their white magic makes her realize that it is all hypocrisy on their part, and its not the magic but the person who determines if its wrong or evil. Her position as a witch who is under fire for kindling demon magic means she has to make decisions quite often during this book, and also suffer the consequences of those decisions; one way or another, harm is being done somehow.

On the relationship front, Pierce emerges as a love interest, but that’s mostly because he basically calls out to the reckless side of Rachel; he is, in fact, more reckless than her, and freer with black magic, something she isn’t entirely comfortable with. His ‘chivalry’ is also often troublesome, which makes for a fraught relationship. The reintroduction of Nick and the parallels drawn between them made the case for Pierce even more complicated. On the Ivy side, things are finally resolved, I guess, as they agree to keep it platonic for the sake of their individuality and their friendship; it was a conversation long in coming, and I, for one, am glad that tension is being put to rest. Jenks suffers a big loss during the book, and Rachel being there for him the way she could was a balm to broken hearts.

The ending is classic Rachel – she sees impossible odds, devises a plan that seems reckless, and somehow manages to pull it off. Still, it reads more as a part 1 of an arc, and not a complete story – she has managed to stall, but she is not out of the fire yet.