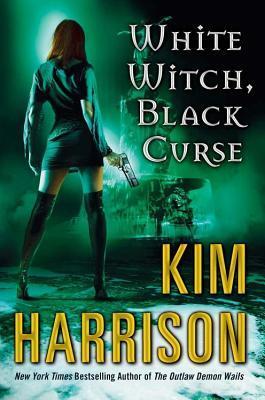 Some wounds take time to heal…and some scars never fade.

Rachel Morgan, kick-ass witch and bounty hunter, has taken her fair share of hits, and has broken lines she swore she would never cross. But when her lover was murdered, it left a deeper wound than Rachel ever imagined, and now she won’t rest until his death is solved…and avenged. Whatever the cost.

Yet the road to hell is paved with good intentions, and when a new predator moves to the apex of the Inderland food chain, Rachel’s past comes back to haunt her.

White Witch, Black Curse has the introduction of a new apex predator in a series where we thought undead vampires were the things that go bump in the night. Before reading this book, I would suggest reading the two short stories Kim Harrison had published earlier, Two Ghosts for Sister Rachel and Undead in the Garden of Good and Evil, because it introduces two characters that are important in this book, Mia and Pierce, who are characters that had interacted in the past with Ivy and Rachel, respectively. Back to the present, Ivy and Rachel get caught up in the hunt for a banshee when Glenn is attacked by one, and obviously they are outclassed by a predator who they can’t defeat, and once again Inderlander politics play a large role in how the situation escalates.

There are a lot of moving parts and plots layered in this book, but it does a good job of bring all of them together to tell and advance this story. While Rachel is trying to break the memory charm that stops her from recalling the events of the night of Kisten’s death, she is being helped by Ford, an FIB agent who is a human empath and also a psychiatrist. Meanwhile, Mia the banshee is wreaking havoc, causing deaths and because Rachel and Ivy have decided to tag her, they are now on her hit-list. The I.S., though, doesn’t want to cause banshee panic, so they scapegoat Rachel, which makes her public image worse, and leads to the Coven of Moral and Ethical Standards shunning her. Other characters that are given focus are Pierce, Bis and Robbie. There were times, however, it felt like a lot was going on, and yet there were sidebars and conversations going on that were distracting from the already puzzling mess happening; it could have done with a more tighter plot, even if the pacing was even.

Now, the concept of auras and emotions is an interesting topic that is given much weight in this book, partly because of the presence of banshee and empath characters, but also because they might be key to Rachel’s future goal of solving the soulless undead vampire problem. Rynn Cormell involves himself in the situation, and Rachel finally gets his number; compared to earlier when she held awe (he was a former president, after all) she now knows how to handle him. Another person whose image changes for Rachel is Pierce, as she had known him years ago but now sees more of his daredevil personality. Robbie’s and Rachel’s complicated sibling relationship also is laid out very well, as is the rift between their views on magic. And finally, to round it all up – Al’s relationship with Rachel changes much in this book. You know, Al is quite entertaining when he isn’t trying to kill Rachel and here there is something of an alliance going on between them; Rachel is also not so reckless anymore and knows how to handle him to get what she wants.

Finally, I can’t end this review without talking about that ending. I mean, there’s so much that happened – right from Rachel trying to get the collective to work her spell, Al literally twisting what she cooked up, the whole resolution with Holly, as well as the Pierce thing. And there’s the whole shock that Rachel has with her shunning and how that will affect her future going forth, as well as what Trent gave her at the end hinting at an olive branch. It was a complicated plot of a book but damn if it wasn’t entertaining and immersive!