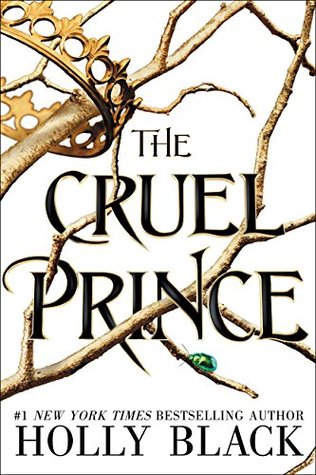 The Cruel Prince by Holly Black
My rating: 4.5 of 5 stars

Jude was seven years old when her parents were murdered and she and her two sisters were stolen away to live in the treacherous High Court of Faerie. Ten years later, Jude wants nothing more than to belong there, despite her mortality. But many of the fey despise humans. Especially Prince Cardan, the youngest and wickedest son of the High King.
To win a place at the Court, she must defy him–and face the consequences.
In doing so, she becomes embroiled in palace intrigues and deceptions, discovering her own capacity for bloodshed. But as civil war threatens to drown the Courts of Faerie in violence, Jude will need to risk her life in a dangerous alliance to save her sisters, and Faerie itself.

This book was definitely one that snuck up on me while I had my back turned. I haven’t read many of Black’s books, and Tithe wasn’t all that memorable to me, so when I went into this, I was aware of the hype but with low expectations. And for the first half, it was like I thought it would be – the story of a mortal girl in a fae court, who is regularly bullied, and who wants to earn her place in their society. Jude has been brought up like a warrior, and she doesn’t yearn to return to the mortal world – she finds Faerie to be her home, for better or for worse, and even if she is being looked down upon by the youngest Prince of Elfhame, Cardan and his friends, one of whom wants to kill her and one who wants to, well, seduce her.

So, I was like, okay, yeah, their constant fights and the building tension seem interesting enough but what about the coronation plot – why is that in the background? The rule passing on seems a much more intriguing one?! But then, in the second half, all that seeming languidness of the first half built up to a development that absolutely drove away any doubts I had regarding the hype. Jude grows from a mortal wanting to just find a respectable position of a glorified guard, to a kingmaker: from a pawn to a Queen. There are so many things I could discuss – the complicated relationships between the characters, specifically Jude with her adoptive father, Taryn and her aspirations in Faerie and the delicate truce between the sisters, the nature of the human servitude situation, the delightful turns of phrases that meld the charm of old-fashioned speaking with modern style sass, Cardan and the ‘romance’ that just seems unhealthy, all the scheming and political machinations, Jude’s anxiety and her struggles never being glossed over and presenting Faerie in all its vicious beauty – but then this review would be too long.

It definitely reminded me of the darkness of Tithe: A Modern Faerie Tale world, understandable as there are a couple of characters from there that make an appearance here, so it is a shared universe, but also the atmosphere of the plot calls to mind more of The Coldest Girl in Coldtown, with a heroine who is just exhausted with the world she is in, but is still doing her best to be kind while also keeping herself first. And that ending – what an exhilarating ending, that more than makes up for the slower first half! Jude delivers an A-level scheme and all the faeries better watch out in the next book!

3 thoughts on “Review: The Cruel Prince by Holly Black”