Hey guys, I am back with another recommendation and since it is close to Halloween, I thought I would give a horror recommendation this time! Plus, Alice Isn’t Dead ended recently, and there is a novel on the way, which means it is a perfect time to start/catch up on it! 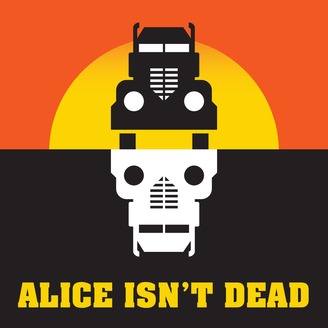 Episodes: 30 (20-25 mins) + 6 bonus miniepisodes (3 min)
Status: complete
Genres: horror, noir, urban fantasy, mystery
Is it gay? Hella (main characters is looking for her wife!)
Ships? One main sapphic couple
Short take? A truck driver searches across America for the wife she had long assumed was dead. In the course of her search, she will encounter not-quite-human serial murderers, towns literally lost in time, and a conspiracy that goes way beyond one missing woman.
Warnings: physical assault, violence, cannibalism.

The main character, who is searching for her missing wife, is a truck driver who travels across America looking for clues regarding her, and also the monster she encounters in the first episode. There are hints the existence of the monsters is a government conspiracy, and a group of people who are opposing it, plus a whole lot of road-trip going on. And all through it, she is analyzing her relationship with her wife, doubting what parts were real, wallowing in anger and worry.

The episodes are like she is talking on the radio, and alternate the actual action of the scene with her ruminating thoughts at other times. She often goes on introspective tangents, describes the loneliness of abandoned places (real places, by the way – there is a whole map and everything) or comments on society at large, and these are quite a thing.  These parts are more like she is narrating for her wife, Alice, while the action parts are like she is describing what is happening, so there is a distinct change of tone.

The major part of it is narrated by Jasika Nicole, for S1 and S2, while S3 is alternately narrated by her and Erica Livingston. The voice acting is phenomenal, and realistic enough to get you in the zone. Additionally, the music adds to the atmosphere of the show, supplying you with dread and fear and ending with catchy end credits.

Part 1, Chapter 4 – Factory by the Sea was quite creepy, and delivered on the not-quite-horror-but-still-scary feeling of this show. But for maximum ‘WTF’ which sends chills down your spine, Part 3, Chapter 5 – What Happened to Hank Thompson is my choice.

Do you wanna discuss your favorite audio dramas? We have a Discord server for it! Join here for this week’s channel – Girl in Space.

If you would like me to add anything to these posts, or would like extra information, please let me know via a comment below! Spoilery/non-spoilery discussions both welcome!