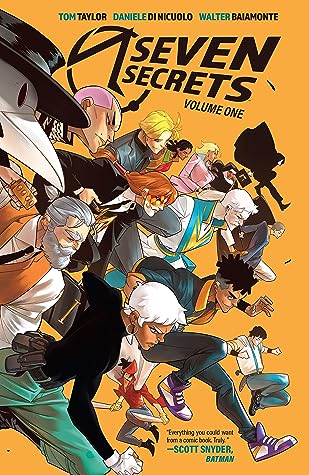 SEVEN SECRETS WILL CHANGE THE WORLD.

For centuries, the Order has trusted in Keepers and Holders to guard the Secrets in seven briefcases against all harm but when their stronghold is attacked and the secrets put in peril, the entire Order must face their greatest fear—an enemy who knows too much and is willing to kill to get what he wants. Now, the Order’s newest member, Caspar, must discover the truth of the Secrets before the enemy does, or risk losing everything.

I received this book in exchange of an honest review, from the lovely people at Boom! Studio Comics and Netgalley.

“Secrets have power. Power to Illuminate… And to keep in the dark. Power to divide. Power to unite. Some secrets must be revealed… Others must be protected.”

Tom Taylor is a name I widely recognize thanks to his recent work in DC COMICS with DCeased series. It was my favorite running series and when it ended it left a hole in my heart because all good things come to a closure. Thankfully not Tom, he shall always keep writing and toss out new tales for me to consume and Seven Secrets does that. Working with Daniele incredible artwork and Walter vibrant colors we got ourselves Seven Secrets. It’s all about protecting the world ancient secrets that could create devastation to reality as we know it in the wrong hands. Hence the order of the keepers and holders who sworn to safe guard these secrets at all costs, including their lives and whatever little privacy that’s left in it. Sadly a pair fallen in love which a big no-no and now their baby is adopted into the order all to grow up and probably become quite the prodigy. Casper is now thrust into a war when the seekers, lead by their leader, Amon are aiming to locate the seven secrets and unleash them.

Gotta say, pages flew by finished it in half an hour and I had so much fun. Loveable cast, cool action scenes and intense drama and memorable comradery but I had a small problem over whole. What are those so important secrets? Why must they be protected, why is it necessary for the order to keep them safe, and why do the seekers, this fanatical group are gunning for them? It feels like I am missing an immense amount of lore and yet I don’t require knowing at all to enjoy myself. It’s kind of like going outside to the beach, you have your swimsuit, sunscreen, good time but you then realize you forgot to bring a change of clothes so you come back home with sand all over the place and now you have to deal with it. Regardless I enjoy myself with this incredible title and Boom! Studios will be fool to not continue it.  Mark my words, they got themselves a future hit!

P.S. if any cosplayer read this, please, do me a favor and cosplay as Canto. They are my favorite character, like just their design alone is worth gearing up.