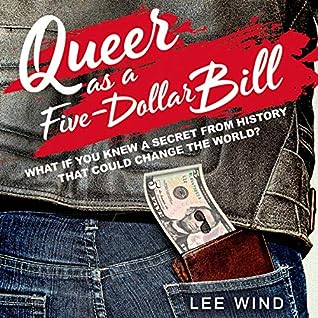 Queer as a Five-Dollar Bill by Lee Wind
My rating: 4 of 5 stars

Wyatt is fifteen, and nobody in his homophobic small town of Lincolnville, Oregon, knows that he’s gay. Not even his best friend (and accidental girlfriend) Mackenzie.

Then he discovers a secret from actual history: Abraham Lincoln was in love with another guy! Since everyone loves Lincoln, Wyatt’s sure that if the world knew about it, they would treat gay people differently and it would solve everything about his life. So Wyatt outs Lincoln online, triggering a media firestorm that threatens to destroy everything he cares about.

Now he has to pretend more than ever that he’s straight (because no one will ever believe a gay kid saying Lincoln is gay.) Only then he meets Martin, who is openly gay and who just might be the guy Wyatt’s been hoping to find.

This nineteenth-and-twenty-first-century coming-of-age, coming out story was inspired by real historical evidence that Abraham Lincoln was in love—romantic love—with another man. QUEER AS A FIVE-DOLLAR BILL asks LGBTQ teens (and everyone else), What if you knew a secret from history that could change the world?

Warnings: extreme homophobia, including targeted attacks and use of homophobic slurs; bullying and cyberbullying

It’s difficult to start with this review because on one hand this book made me feel a lot of things (well, primarily rage on behalf of the main character) while on the other hand, it is an upsetting book to read. The story is about a closeted kid, Wyatt, living in a very homophobic town, where his father runs a Lincoln-themed B&B called Lincoln slept here (he claims to have the bed where Lincoln slept in at Springfield) and his mother works for the mayor. Wyatt is frequently bullied by his classmates, especially by the mayor’s son, Jonathan, who bullies him using homophobic attacks and slurs. When Wyatt gets a book of letters from Lincoln to Joshua Speed for his school project where he has to write a book report in the form of a blog, he discovers that Lincoln may have been queer and if one of the most celebrated presidents being queer could be okay, he hopes that means it can be okay for him to be queer, too! Problem is when he ‘outs’ Lincoln on his blog, using the letters as proof, all hell breaks loose in his town.

The reaction to this blog is swift – Jonathan takes the opposing stance and denounces him, his teacher and principal call him a liar and threaten to suspend him if he doesn’t take down the blog and retract the radio interview and his family is sued (attempted) for defamation. People just don’t want to consider the letters and think in another way – for them, Lincoln was great and him being queer would make him not great, which Wyatt can’t understand. The story is about his fight to uphold his own free speech, and another boy, Martin, who he finds online supports him with help from his lawyer mother. Meanwhile, Wyatt is having his own problems with his supposed best friend, Mackenzie, who at the start was his girlfriend but dumps him when he stands by his blog and instead starts dating his nemesis, Jonathan.

The content in this book – the bullying and the homophobia – can be upsetting for many queer people. There are right-wing conservatives bigots galore, so you can expect every vitriolic statement possible; there is one right-wing host who goes on a whole rant on his show and that pretty much made me throw something across the room (I didn’t, don’t worry). Sometimes, it did feel that the drama that arose from a simple book report could be so extensive, but honesty if you consider American conservatives (or heck, any conservatives), it isn’t that much of stretch. We already see such examples of overt homophobia in the news, media, etc, so for me, yeah, I didn’t find that so out of the realm of the possible. Which is why I would advise caution when you pick this book because the content is quite enraging.

With the ending, I feel some aspects of the story were hurried along to achieve some closure. For example, in the start of the book, you feel for Wyatt not being able to come out of the closet because (a) he lives in a homphobic town, and (b)he is a freshman, which means 3.5 years more of this hell. But towards the end, we don’t get to know how his life might be in the town anymore. Secondly, I was not satisfied with Mackenzie being let off the hook, because she barely does anything to get forgiveness for her awful behavior. Apparently, getting along with the homophobes is fine just until they advocate for murder; otherwise they are apparently very fine to kiss. Jonathan himself does pretty much nothing – swooping in to save at the last minute doesn’t count, Mackenzie – and doesn’t even apologize to Wyatt for bullying him for all these years and attacking him with his blog.

Finally, the audio, narrated by Michael Crouch is done quite well, although I did have to get used to it in the start because I felt that the voice was slightly muffled in quality and since most audiobook players don’t have equalizers, it can be a bit of an adjustment to listen to.

Overall, is it a good book about a closeted kid finally getting to tell his truth as well as open up discussion? Yeah! But will you be able to get through it? Maybe, with a lot of teeth gritting.

Received an advance reader copy in exchange for a fair review from I’m Here. I’m Queer. What The Hell Do I Read?, via Netgalley.