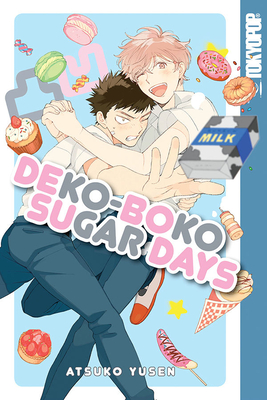 Dekoboko Sugar Days by Yusen Atsuko
My rating: 4 of 5 stars

Yuujirou Matsukaze has been close friends with Rui Hanamine since the two of them were children, and at that time, Yuujirou was the one who stood up for and took care of his adorable, soft-hearted friend. But as it turns out, Yuujirou’s childhood dreams end up growing a little too big to handle ― or, rather, too tall! At over six feet in height, the cheerful and happy-go-lucky Rui towers over his would-be protector… and still has no idea Yuujirou’s had a crush on him since they were kids!

Warnings: contains sex scene (since this is a graphic novel, feels important to point that out)

The synopsis is quite clear on what this is – a cute childhood-friends-to-lovers story between two boys, with both unaware of the other’s feelings. Yuujirou was his best friend Rui’s protector when they were kids, but now Rui himself has grown up to be big and strong-looking, so he feels a complex about it. Nevermind that Rui is the definition of ditzy and clumsy, and oblivious to boot. They both also have different social circles in school, but the consensus from their classmates is practically “why aren’t these two dating yet?” which is hilarious. Even Rui’s friend, who has a crush on him, is aware of these two! Yuujirou’s complex about his height leads him to think over a girl’s confession, which Rui misunderstands. Anyway, they basically communicate and figure it out, and start dating, and take it slow with the physical stuff. I also liked how much prep and care was shown in the sex scene itself. The art overall is pretty, and the character designs are good. Finally, all I want to say is, its a cute standalone manga that makes for a fluffy and adorable read.

Is it diverse? gay romance with queer main and secondary characters