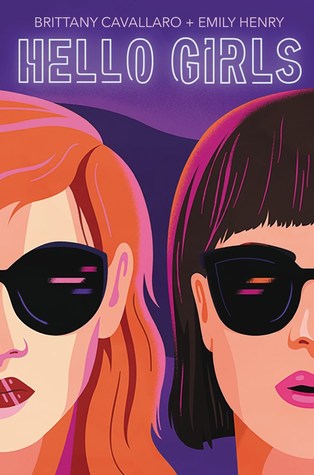 Hello Girls by Brittany Cavallaro
My rating: 4 of 5 stars

Winona has been starving for life in the seemingly perfect home that she shares with her seemingly perfect father, celebrity weatherman Stormy Olsen. No one knows that he locks the pantry door to control her eating and leaves bruises where no one can see them.

Lucille has been suffocating beneath the needs of her mother and her drug-dealing brother, wondering if there’s more out there for her than disappearing waitress tips and a lifetime of barely getting by.

One harrowing night, Winona and Lucille realize they can’t wait until graduation to start their new lives. They need out. Now. One hour later, they’re armed with a plan that will take them from their small Michigan town to Chicago.

All they need is three grand, fast. And really, a stolen convertible can’t hurt.

Chased by the oppression, toxicity, and powerlessness that has held them down, Winona and Lucille must reclaim their strength if they are going to make their daring escape—and get away with it.

I’ll start this by saying – I have always had a weakness for Angry Girl novels, so it was no surprise that I loved this one, too. In Hello Girls, two teens escape from the town and the families that have made their existence miserable. Their escape starts with a string of petty crime and escalates to running from a drug lord, and a vengeful father. Short on money, but not on ideas, they resort to unusual means to get to answers, and to flee their chains.

Firstly, the authors do a great job of getting into the emotional states of both girls; while it is in third person, it is clear whose perspective it is and the ‘voices’ are distinct. Lucille is the protector of the two, and fiercely guards Winona from the world as much as she can; it was quite interesting to see it contrasted against the ‘protectiveness of Winona’s father. Winona is the one who changes the most, as she goes from being sheltered to finally tasting freedom for the first time, and it make her reckless and passionate about it. The scenes of domestic abuse with both are quite different (Winona’s is by her father, and Lucille’s is by her brother’s violence and her mother’s impassiveness) but the core of it is that they are stuck in a family that harms them, and diminishes them. With no recourse, their only way is out and when even that is threatened, they decide to break free themselves

The story frequently calls upon the specific brand of misogyny and violence that young girls face, especially pretty ones, and how these two rail against it. For Winona, her beauty is something that her father cultivates for his own gratification, and it is the very thing she ruins for him as soon as she can; she is done being his doll. Lucille’s is also something similar, deliberately being the opposite of what one expects of a pretty girl; she is also done with being the pillar for her family thanklessly. There’s also the fact that they turn the expectations of people back on them, and while it may be called rebellion, it is also the only way they feel they can express themselves. Real world worries, however, plague them much more in the later half of the book, as their way becomes more perilous and they have to take more drastic steps to keep going.

“They made the world refocus its gaze. See us. See us. SEE US. And if they couldn’t see Lucille and Winona for who they were, they would pay for it. In cash.”

And lastly, of course, the bond between these two is the highlight of the book. From pretty much the start, I was struck with how close their bond was, and the way these two were like soulmates. For both of them, the one thing they were sure about was the place of the other in their future. The road trip does bring up some cracks, and I wish they were explored more – like, Lucille’s worry about Winona’s changes, Winona’s seeing herself as having a monstrous side, or even the hints of gay subtext which I don’t know whether to see as a hint of questioning or not. I do feel that with a little nudge it could easily have been sapphic, so I guess it wasn’t.

“It struck her then that the two of them were crouched between a church and a police station—two places of confession—and that, for whatever reason, they’d chosen each other instead.”

The writing also has an undertone of dark humor, with the Naming of Things, and the way the girls sass people, or how they turn the hurt against them into a joke to deal with it. Then there are also hints of tenderness they see from other people, not the kind afforded to them because of their looks, but because they need it. And there is also Anger – loads of it, that you can’t help being angry, too. It was full of emotions in this way, making you be there with the girls, feeling their betrayals, their heartbreak, their joy, and their danger. It was beautifully written, especially the first half; the second half kinda had an issue with ‘where to go from here’ but it found its way by the end.

Overall, definitely recommended if you are here for girls raging against the cruel world.