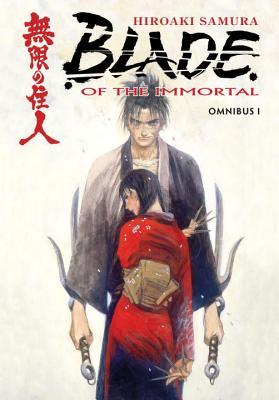 Blade of the Immortal Omnibus 1 by Hiroaki Samura
My rating: 4 of 5 stars

A cursed, seemingly immortal warrior aids a young girl in her quest for revenge, as the students of a brutal new sword school tear a bloody path across Japan. Hiroaki Samura’s massive manga series spawned an anime run, a spinoff novel, an art book, and a live-action film! Samura’s storytelling tour-de-force also won Japan’s Media Arts Award, several British Eagle Awards, and an Eisner Award, among other international accolades. Intense and audacious, Blade takes period samurai action and deftly combines it with a modernist street idiom to create a style and mood like no other work of graphic fiction.
“Blade of the Immortal Omnibus Volume 1” contains the first 3 volumes of “Blade of the Immortal” by Dark Horse.

Note: Not recommended for younger readers due to sensitive content

Blade of the Immortal is a story about a warrior who is basically immortal, being recruited by a young girl for her revenge. The person she wants to take revenge against is the founder of a new swordmanship school, who seeks to destroy the tradition of older schools by killing all their members. There are a lot of character-driven arcs, sure, but the series is full of action, with some cool spreads of final blows. The artwork is harsh, and detailed, and the story sort of revels in its brutality (I mean, just check the warnings). Character relationships are also explored, but topically, and I wish there was more about that than the regular battles, because the latter tends to get kind of repetitive after a while. Overall, though, it is an interesting and visually enthralling series.

Is it diverse? Medieval Japan setting; written by a Japanese author

Received an advance reader copy in exchange for a fair review from Dark Horse Manga, via Edelweiss.