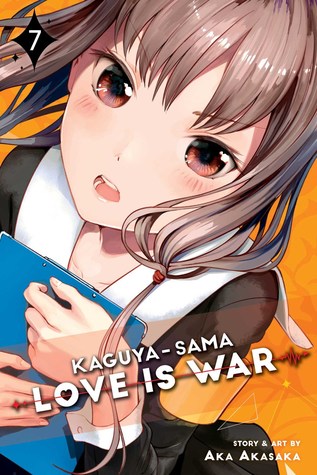 Will Miyuki get reelected as student council president? Is newcomer Miko Ino going to be serious competition…or a school laughingstock? Then, Kaguya and Miyuki draw each other in art class (results may vary). Yu wants to do the right thing. Miyuki catches up on sleep, which has an unexpected effect on his attractiveness to women—especially Kaguya. And Kaguya anxiously awaits a certain invitation.

Does underwear make the man?

This one was a pretty good sequel, hitting all the right notes on the comedy and the romance. First, we finally get an explanation for Miyuki’s constant piercing eyes. And with Kaguya, Miyuki and Chika heading into the third year, they are campaigning for a repeat term of Miyuki. Kaguya’s manipulations get another target as she tries to turn the tide in his favor, even if his main competition is only a first year girl, Ino. Ino’s campaign seems to be collapsing on itself as she advocates for a stricter obedience of rules in the students, a move that is definitely not making her popular. I liked the addition of a new character to their dynamic, because it is sure to change things up a bit and also introduce new kinds of misunderstandings, as was evident in the underwear incident (omg, Kaguya, you sly fox!). Between all this, Miyuki almost comes close to asking Kaguya out(!), Kaguya vehemently denies having any feelings for him, to her minion (I mean, like really, you made the girl spy and follow him!) and even if didn’t work out, the tension and the anticipation was well worth it. It is a thoroughly entertaining volume.