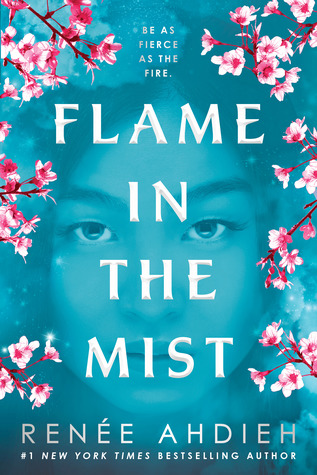 Flame in the Mist by Renée Ahdieh
My rating: 4 of 5 stars

Mariko has always known that being a woman means she’s not in control of her own fate. But Mariko is the daughter of a prominent samurai and a cunning alchemist in her own right, and she refuses to be ignored. When she is ambushed by a group of bandits known as the Black Clan enroute to a political marriage to Minamoto Raiden – the emperor’s son – Mariko realises she has two choices: she can wait to be rescued… or she can take matters into her own hands, hunt down the clan and find the person who wants her dead.

Disguising herself as a peasant boy, Mariko infiltrates the Black Clan’s hideout and befriends their leader, the rebel ronin Ranmaru, and his second-in-command, Okami. Ranmaru and Okami warm to Mariko, impressed by her intellect and ingenuity. But as Mariko gets closer to the Black Clan, she uncovers a dark history of secrets that will force her to question everything she’s ever known.

While this book is being hyped up as a Mulan retelling, I must say that the only similarity between the tales is that a girl cross-dresses. Mariko’s reasons are not for honor, exactly, but they come close – when she is attacked and left for dead, she infiltrates the Black Clan to find out who paid them to do so and why, and so that she can prove her worth as more than just marriage material. What she doesn’t know is that she has become a player in the power struggle between a cunning Emperor and a disgraced ronin, as well as other forces in the Imperial court.

Mariko’s journey through the book is to learn the meaning of honor on her own terms, as well as to reclaim her femininity. The edicts of bushido are a big theme in the book, along with philosophical ruminations. Coming from a noble family, she only knows these things in a theoretical sense, but living with the Black Clan and finding belonging there, as well as the true meaning of honor in protecting the people, Mariko’s eyes are opened to the apathy in the nobility. While staying with them, she is also drawn to the two leaders (not romantically for both – this is not a love triangle!) – Ranmaru and Okami. Her romance with the latter is a lot of hate-to-lust-to-love, and I felt it could have been fleshed out better. Ranmaru’s and Okami’s closed off natures seem to conflict with their characters at some points, too.

The beginning of the book slowly develops the characters, with the writing attributing meaning to every gesture in most scenes in the first half. While the narrative is mostly from her perspective in the third person, it also occasionally switches to that of the two young men, as well as her brother Kenshin (who is interesting in his own right but vastly underutilized in this book) who has been searching for her, and some other players in the Imperial court. The political ramifications of that ending set up an interesting plot for the sequel, and I, for one, am delighted that I can read it right away. (Can you believe having to wait after THAT ending?!)

Is it diverse? The setting is in feudal Japan, and all the characters are Japanese.

One thought on “Review: Flame in the Mist by Renée Ahdieh”