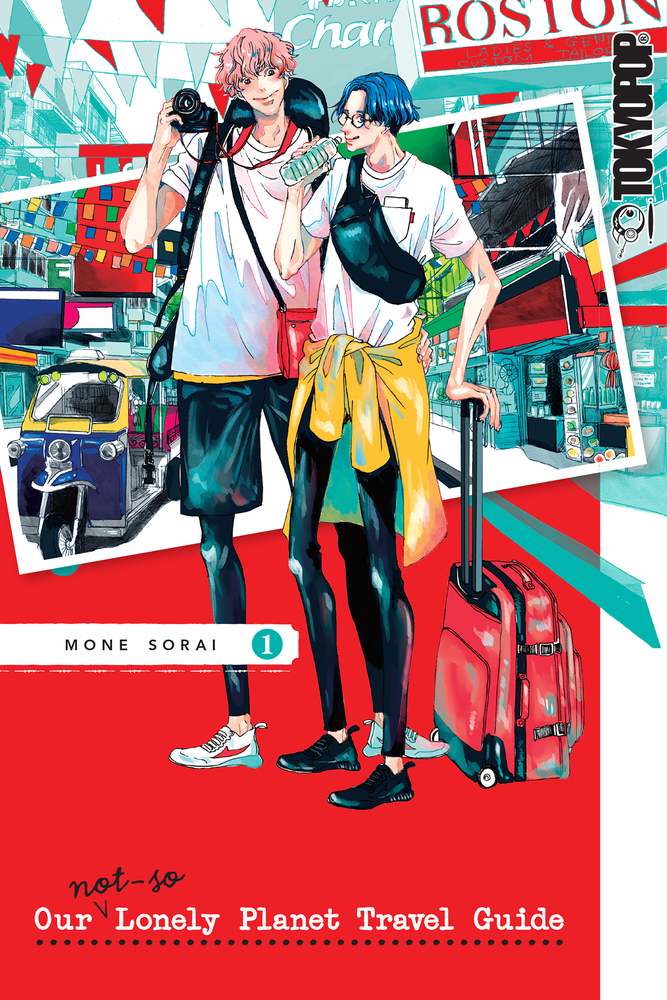 Our Not-So-Lonely Planet Travel Guide, Volume 1 by Mone Sorai
My rating: 4 of 5 stars

Super serious Asahi Suzumura and laidback, easygoing Mitsuki Sayama might seem like an odd couple, but they made a deal; they’ll vacation around the world and when they get back to Japan, they’ll get married.

As they travel from country to country, the different people, cultures and cuisine they encounter begin to bring them closer together. After all they’re not just learning about the world, but about themselves too.

This charming series about a gay couple who decide to go on a trip around the world before they get married was already appealing to me as a synopsis, but the actual story is even better. It has a serious guy, Asahi, and his laidback boyfriend, Mitsuki, going together to visit Thailand, India and Georgia on the first leg of their journey. We don’t know much about them so far, only that Asahi lost his job, and Mitsuki and he were in the same highschool but not exactly friends, but later on they reconnected; Asahi is also more likely to be afraid of PDA, and is more anxious in general, while Mitsuki is easygoing and interested in new experiences and exploring and is a photographer. Their vastly different approaches to their vacation, like Asahi’s extreme carefulness and anxiety versus Mitsuki’s cool nature and open affection provide the slight tension in their relationship.

I loved each of their visits, but Thailand probably made a bigger impact on me, because while there they meet (more like rescued by) a trans woman, who brings along her tom partner and the two of them act as guide for our couple, but it is also about queer people bonding quickly. The India trip had elements that I had expected, because well, I know how tourists are ‘welcomed’ in India, lol, but the destination being Varanasi was surprising to me, though there is the expected Agra visit (which somehow took more than 14 hours by train? they are in the same region!). Georgia has them meeting an old acquaintance and further tension but it is also resolved by a little communication. The artwork is a bit looser than expected of the genre but it has its own charm. I liked seeing their travel depicted, the foods depicted (which, yum!) and the slow reveal of their relationship. I look forward to further adventures from them!

Is it diverse? queer main characters; queer and trans side characters

Received an advance reader copy in exchange for a fair review from TokyoPop, via Netgalley.