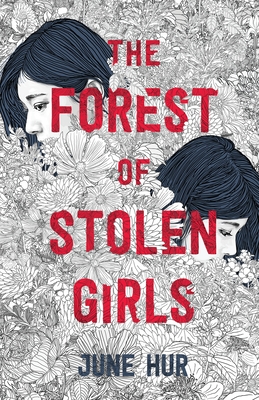 The Forest of Stolen Girls by June Hur
My rating: 5 of 5 stars

Hwani’s family has never been the same since she and her younger sister went missing and were later found unconscious in the forest, near a gruesome crime scene. The only thing they remember: Their captor wore a painted-white mask.

To escape the haunting memories of this incident, the family flees their hometown. Years later, Detective Min—Hwani’s father—learns that thirteen girls have recently disappeared under similar circumstances, and so he returns to their hometown to investigate… only to vanish as well.

Determined to find her father and solve the case that tore their family apart, Hwani returns home to pick up the trail. As she digs into the secrets of the small village—and reconnects with her now estranged sister—Hwani comes to realize that the answer lies within her own buried memories of what happened in the forest all those years ago.

Warnings: abduction and confinement, references to trafficking of women, death of family, poisoning and murder, mention of suicide, mutilation

I really enjoyed Hur’s debut The Silence of Bones and was quite eager for this book, and it definitely lived up and beyond the former. Like The Silence of Bones, this book, too, is a mystery set in the Joseon era, with a female protagonist, but that is where its similarities end. In The Forest of Stolen Girls, Min Hwani returns to her hometown on Jeju island to search for her missing father, who had returned to investigate an unsolved case. Five years ago, she and her younger sister Maewol had got lost in the forest and been found near the body of a suicide victim. Hwani and her father left for his job as an inspector, but Maewol was left behind with the local shaman because she showed signs of awakening power. Meanwhile, since then there have been girls that have been taken on the regular, some of them even in groups, making it to thirteen girls missing in five years. Hwani reckons that if she solved the case of the missing girls, the path of solving it will also lead her to her missing father, so she retraces his steps from a year ago.

First of all, this book is grounded in the historical context, that is, Joseon being a vassal state of the Ming dynasty of China, and thereby having to send tributes to it. Among those tributes are young girls, usually between the age of 11 and 18. Hwani, being over 18, is not as likely to be a tribute, but in caution, she disguises herself as a nobleman to visit the island, though it becomes moot pretty soon when she is easily recognizable. In any case, the plot is very much about how unsafe it was for women at the time, and Hwani, though stepping into her father’s footsteps, doesn’t have the freedom he did. For one, she has run away from her home at her aunt’s house for this investigation, and has to ensure no one reports back to her aunt who just wants her to make an advantageous marriage. Maewol, meanwhile, living as a shaman’s apprentice all these years, has been out of the expectations of girls at the time, so she doesn’t give as much stock in the roles assigned to women as much as Hwani does. They have several differences in opinion, their image of their father, etc, and this book is also about the relationship between these two sisters mending itself on the way.

As for the mystery, it wasn’t exactly hard to put the motive together on why the girls were taken, but Hwani uncovering the who and what and how of it was quite interesting. One thing I have to note, though, is that she is really susceptible to poisoning, getting poisoned on more than one occasion, and in very naive fashions. She is also a bit reckless when it comes to confronting people, which is saying something since by all appearances it should be Maewol. But both sisters are headstrong, and Hwani especially is determined to find her father and solve the case, too. Along the way, her perception of her heroic father is changed a bit, but her devotion to the investigative crafts isn’t. Aside from these two, there is an entertaining cast of characters, which makes for plentiful suspects and allies both. And the atmosphere! You can feel the setting, and the forest scenes were especially surreal! Also, cherry on top, like the author’s first novel, there is no romance in this one either, if you are the sort of person who prefers that. All in all, it was a great read!

Is it diverse? Korean cast of characters as it is a 15th century Joseon setting

Received an advance reader copy in exchange for a fair review from Feiwel & Friends, via Edelweiss.

Previous book by the author

One thought on “ARC Review: The Forest of Stolen Girls by June Hur”