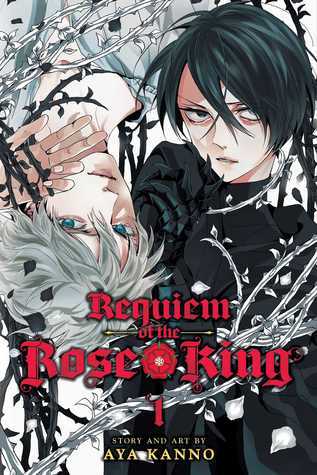 Richard, the ambitious third son of the House of York, believes he is cursed, damned from birth to eternal darkness. But is it truly fate that sets him on the path to personal destruction? Or his own tormented longings? Based on an early draft of Shakespeare’s Richard III, Aya Kanno’s dark fantasy finds the man who could be king standing between worlds, between classes, between good and evil.

Richard’s father, the patriarch of the House of York, is poised to become king of medieval England during the bloody Wars of the Roses. But just as success is imminent, he is abruptly cut down. Plunged into despair, Richard acts out in revenge and must face a powerful and beautiful new enemy.

English monarchy being a confusing mess of repeated names, I wasn’t sure exactly which Richard this series was about, only that it was somewhere around the War of Roses. When I looked it up, and cross-referenced with context from The White Queen (look period dramas are the only way I can remember which royal member was which), I realized it was that Richard! Being an adaptation, this one, of course, take its own liberties with historical accuracy; there is a dash of magic and queer rep. At first the references to his body had me thinking he had a physical disability or something (I later found out he had scoliosis), but instead Richard is intersex in this story (or, at least, it appears to be so as the word intersex isn’t really used) and in that era and time, being different was obviously considered an abomination. His mother, Cecily Neville, basically considers him a spawn of Satan despite birthing him herself, but his father (who is also Richard) dotes on him, and his secret is known to a few people.

Richard’s self-esteem suffers from his ‘difference’ and there is a lot of self-loathing included in his story. I was excited to find out it is a queer retelling, but I have to warn y’all, the rep is not a happy one. Like, with his mother’s treatment of him, and Richard’s self-hate, and desire to be ‘normal’ like others, if you’re looking for a positive/happy queer rep, this is the wrong place and the wrong character. His story is destined to be dark, and he himself has visions of him causing great turmoil in the future. In the present, though, he is eagerly supporting his father’s bid for the throne that is currently being occupied by the ‘usurper’ Lancasters. He has a drive to be stronger, to have more of a role in the events around him, and at times a darker side to him also pops out, like how he advises his father to go to war. On the flip side, with how a certain person has got to know his secret closer to the end of this book, it seems young Richard is going to have a tough time. Richard is already shaping up to be a morally complex character, with how his conviction and his feelings look to be on the path of crashing against one another, and his dark prophecy setting him up for an antagonistic role in the future. (I mean, we already know how his story ends, but I want to know what Kanno has in store for him)

Most of the events in this first volume surround his childhood and the story about his need for revenge and his enmity with the Lancasters is just starting; Margaret of Anjou is just getting fired up, too. One interesting outtake – I am interested in seeing how Henry’s (the current King) and Richard’s relationship will develop, and I sort of got some vibes there which make me think Richard might be queer (bisexual), too. (I must admit that the age gap also has me side-eyeing it a bit) And as the setting being the War of Roses already promises to be a political plot, hopefully, which means I am so looking forward to catching up on this series. The artwork also lends beautifully to the dark atmosphere, and I love the character design of Richard (little Richard with his dark cloak was adorable, ngl) and some others like the ghostly Joan, or Margaret, but god I will need a constant glossary if I am to keep track of the multiple Edwards and Richards and Henrys (maybe).

Is it diverse? intersex protagonist