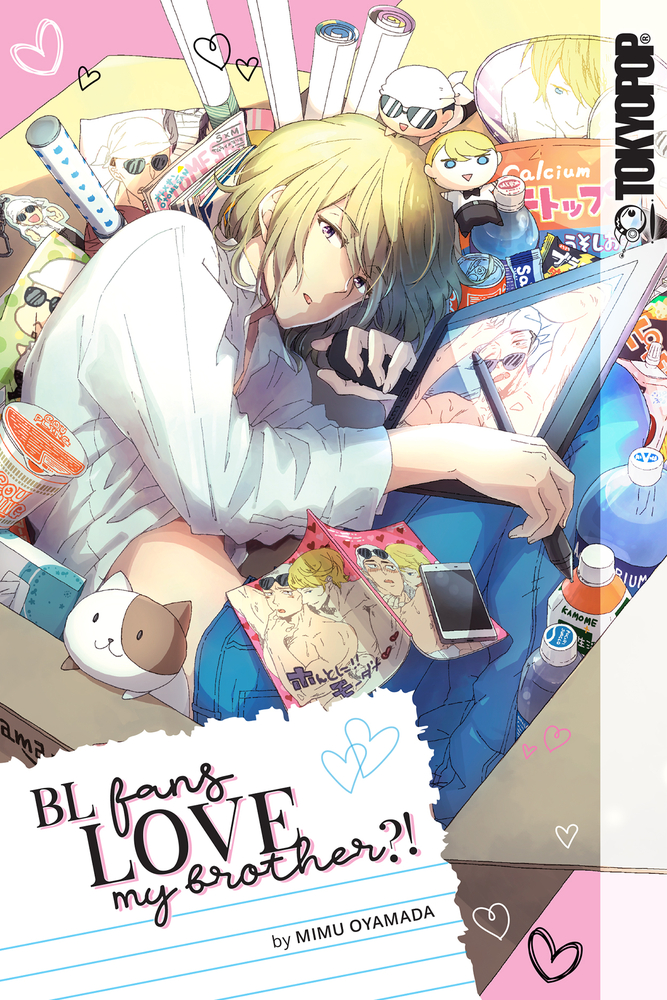 BL Fans LOVE My Brother?! by Mimu Oyamada
My rating: 3.5 of 5 stars

Kirika Amano is just an unassuming college freshman, but her shut-in big brother, Teruo, is about to turn her life upside down… Even though he’s barely left their family home in four years, Teruo has a big secret: he’s been living a double life online as the boys love artist sensation Amaterasu!

With his popularity online growing more and more, Teruo begs Kirika to pose as Amaterasu in the real world, throwing her right into the deep end of doujinshi conventions, hot and sweaty fan comics, and adoring fans who want to worship Teruo—and now Kirika—as a god!

As Kirika begins to crack under the pressure, she relies on Teruo’s knowledge to guide her through this new world of conventions, followers, and her own budding love for her big brother’s OTP, just as Teruo needs his little sister to help him come out of his shell and explore the real world. And as each new event pushes them further into the limelight, can they find a way to keep the secret of Amaterasu’s identity and also have room to be themselves?

A hilarious story of a brother-sister duo in the world of BL, this book has a semi-famous doujin artist have his sister be the public face of him. The story is from the point of view of Kirika, whose older brother is a shut-in (which seems like agoraphobia, but it isn’t confirmed) and has been so since the last four years. Unknown to her, during that time he got into a shonen (from the looks of it) anime, that has a large BL following, and he basically becomes a fudanshi who draws doujinshi. He has mostly been relying on one of his followers to do the actual sales at Comiket, etc, but this year, with that person unable to help him, he turns to Kirika. Kirika is at first shocked by his obsession with the show, and then further shocked by the content of her brother’s manga. She is bribed into helping him (with food) and gets her first taste of the BL fandom at the convention, where she is amazed by the fujoshi crowd that reveres her brother, ahem Amaterasu as a god.

While it pokes a lot of fun at Teruo for his fan behavior like getting all the collectibles, getting anything even tangentially related to the show, plus his nonchalance about the BL porn in front of his sister, it is overall a heartwarming story about siblings finding something common to connect. Kirika, while initially uninterested and even a bit over her brother’s obsession, ultimately starts to get interested in the BL genre, seeing her brother’s as well as the other fans’ enthusiasm. However, since it is entirely from her point of view, Teruo still remains a mystery. We do know how he got into the show, but we don’t know his backstory, as in why he becomes a shut-in. I assume it was bullying because he was 16 then, so high school bullying seems plausible; he is also attractive looking which makes his whole ‘I am not worthy’ complex, and his worries about how he would be perceived as a fudanshi in the fujoshi crowd seem like his negative self-worth stems from something traumatic. I guess it would be heavy for what is a comedic manga, but it still could have been fleshed out a little!

The artwork is decent enough, and the story flows well between the scenes. It also is a standalone, so the plot is quick and doesn’t drag on, which works in its favor. Overall, a good comedic standalone manga for a quick read!

Received an advance reader copy in exchange for a fair review from Tokyopop, via Netgalley.