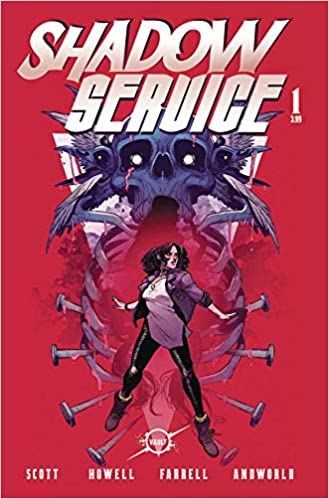 Shadow Service Vol. 1 by Cavan Scott
My rating: 4 of 5 stars

Worried your partner is cheating? Need a missing person found? Gina Meyers is the Private Investigator for you. Sure, she’s a witch who worries that her powers make her more of a monster than the crooks she’s trying to catch, but it’s not like London’s criminal underworld is literally going to hell… is it? Spy craft meets black magic in the shadowy world of MI666.

NOTE: Not a YA novel

A promising start to a series, Shadow Service excellently builds a world of supernatural beings in a shadow war against each other, and a protagonist who has just stumbled into her role in it. Gina is a witch who supplements her PI service with he magical powers. She doesn’t know where these powers come from, only that since she was a kid, she would just immediately know the correct spell for whatever she wanted; the side effect of using her magic is that she has to suffer insomnia in proportion to the strength of the spell. She also works some jobs for a specific client of hers, who we later find was something of a mentor to her, and her only friend is a literal rat (who can also speak, incidentally, but who/what he is a whole another story).

During one period after a finished job where she is still suffering the effects of insomnia, she comes across a stalker, and a corpse and two skilled agents after her, who know how to use magic themselves, and she is taken prisoner. They inform her of their organization and how her client is part of an enemy organization and they need her to be an in for them. Gina, however, has her own plans about whom she will ally with, and the changing landscape of her current problems direct some of it. There’s a cat and mouse game going on at some point of time, and the variety of supernatural beings (there’s a ghoul, someone related to an angel or something, some demons thrown in, etc) make for an intriguing plot, even if at times you can be a bit confused as to what they are, and what is going on.

Gina’s dry humor mixed with the grim narration gives a distinct personality and tone to how the story is rendered. The character design is pretty good for the most part and the coloring is fantastic as to the mood of the story, keeping the color palette vivid but contrasting it with heavy inking to evoke a gritty setting. There are a lot of violent and gory scenes so like look out for those, but it isn’t overdone in my opinion. Finally, I am looking forward to future installments because that was one hell of an ending.

Received an advance reader copy in exchange for a fair review from Vault Comics, via Edelweiss.