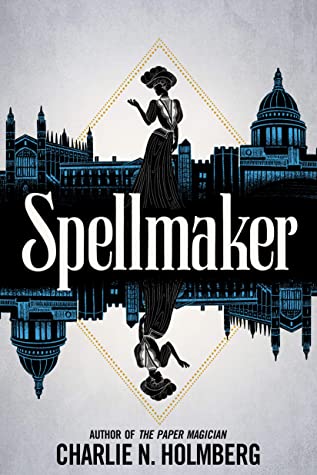 Dead wizards, stolen enchantments, and broken promises force a young spellbreaker out of the shadows in the next thrilling installment of the Spellbreaker series by the Wall Street Journal bestselling author of The Paper Magician.

England, 1895. An unsolved series of magician murders and opus thefts isn’t a puzzle to Elsie Camden. But to reveal a master spellcaster as the culprit means incriminating herself as an unregistered spellbreaker. When Elsie refuses to join forces with the charming assassin, her secret is exposed, she’s thrown in jail, and the murderer disappears. But Elsie’s hope hasn’t vanished.

Through a twist of luck, the elite magic user Bacchus Kelsey helps Elsie join the lawful, but with a caveat: they must marry to prove their cover story. Forced beneath a magical tutor while her bond with Bacchus grows, Elsie seeks to thwart the plans of England’s most devious criminal—if she can find them.

With hundreds of stolen spells at their disposal, the villain has a plan—and it involves seducing Elsie to the dark side. But even now that her secret is out, Elsie must be careful how she uses the new abilities she’s discovering, or she may play right into the criminal’s hands.

I received this book in exchange of an honest review, from the lovely people at 47North and Netgalley.

“Spells are like any form of knowledge – they can be forgotten.”

Spellbreaker was a fun read and when I saw Spellmaker available for request on NetGalley I knew straight away that I can’t start 2021 without reading it. I did not regret my choice, in fact, Spellmaker makes everything that I had issues before in Spellbreaker. That’s what I love about sequels you know? They can be better then the original and add so much needed appraisal for me to continue a series. Charlie N. Holmberg takes us to the exact moment where we left off, Elise has her happy ending, right? They thwarted the evil plot, Bacchus is healed from the siphoning spell, Ogdan, Elise’s employer and father figure is free. Everything is solved! Truly… Except that Elise carried away by the police after a tip that expose her secret identity as a spellbreaker. Not only that, but the leader of the Cowls is still out there and its none other then Lily Merton one of the biggest and stronger Magister’s of London and she has her sights on acquiring Elise’s service once more and bring her plot to full motion.

“She wanted to hold on to this intoxicating bliss for as long as the universe would allow it.”

Elise is a changed woman compared to her first appearance in Spellbreaker. She no longer has to hid away her identity thanks to the intervention of Bacchus on her behalf, she never been this close before to Ogdan, and she feels competent with her abilities and satisficed with her life for the first time ever. It’s so inspiring to see that the most disastrous of events can accelerate the growth of a person even if it includes small terrorist acts unknowingly, lol. I was also thrilled for her relationship with Bacchus compared to the first novel, which a bit… shoehorned at my face but in here it felt so natural their evolution in the grand scheme of things. Fake marriage to actual marriage purpose, the two becoming vulnerable to one another, the endurable lust for one another, should  I go on or is it enough? ;p

“Elise,” he said, nodding as another servant opened the gates for them. “When you are an outsider, you do what you have to do to fit in, or people will ostracize you. Sometimes without even realizing it.”

If we are discussing about Elise’s progression as a character I can’t stop the praise just here because I have to congratulate everything in this book. Every character became a far more memorable to me thanks to their exposure and relevance to Spellmaker’s bigger plot line. Ogdan’s finally free and being paranoid not knowing that he is overbearing the use of his mental magic, Bacchus coming to the shocking truth of the result of the siphoning magic that practically robbed him most of his life and his constant struggle to fit in London and even our villain who’s motivations are not but surprisingly admirable but flawed with its usage of violence and extortion. The major theme I’ve gotten from Spellbreaker earlier was the struggle of being the other, be it your social coming, the origins of your birth and gender but with Spellmaker I’ve witness that various characters are facing this inexplainable dread of this hopelessness of their lives. Sure, Elise’s anxiety and self hatred is a prime example but we do see others dealing with such issues like Ogdan’s endeavor with his magic and sexual orientation, Bacchus title as both a bastard and a half Bajan who will never be accepted even with his love ones, and even Lily who’s the suppose antagonist of our story and her drive to destroy the royals and influence the working class and achieve true equality.

I can shower Spellmaker with thousands of flattery but it’s not a total perfect book. It is as expected with sequels that are to tide up all loose ends. Elise finding her long lost family, Lily’s fiendish plans are stopped, Bacchus and his sweet heart living happily after, even the supporting and minor characters are getting full proper conclusion. Sounds too perfect right? Yeah, it’s exactly as it sounds and for that I feel that there’s no flaws that I can poke at except for the pacing of the story. It felt too fast, like a speedy car ride that no one is pushing on the brakes but that’s fine, some stories need to be throttled to their endings and I can’t imagined Spellmaker ending any other way. The book is fun, sizzling and thought provoking about one’s ambitions and inner personal demons. You want a good book for your weekend? Spellmaker is the one for you 🙂