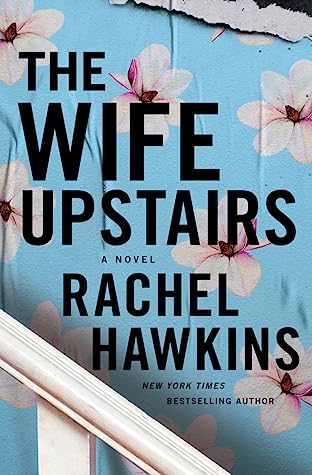 The Wife Upstairs by Rachel Hawkins
My rating: 4.5 of 5 stars

Meet Jane. Newly arrived to Birmingham, Alabama, Jane is a broke dog-walker in Thornfield Estates––a gated community full of McMansions, shiny SUVs, and bored housewives. The kind of place where no one will notice if Jane lifts the discarded tchotchkes and jewelry off the side tables of her well-heeled clients. Where no one will think to ask if Jane is her real name.

But her luck changes when she meets Eddie Rochester. Recently widowed, Eddie is Thornfield Estates’ most mysterious resident. His wife, Bea, drowned in a boating accident with her best friend, their bodies lost to the deep. Jane can’t help but see an opportunity in Eddie––not only is he rich, brooding, and handsome, he could also offer her the kind of protection she’s always yearned for.

Yet as Jane and Eddie fall for each other, Jane is increasingly haunted by the legend of Bea, an ambitious beauty with a rags-to-riches origin story, who launched a wildly successful southern lifestyle brand. How can she, plain Jane, ever measure up? And can she win Eddie’s heart before her past––or his––catches up to her?

With delicious suspense, incisive wit, and a fresh, feminist sensibility, The Wife Upstairs flips the script on a timeless tale of forbidden romance, ill-advised attraction, and a wife who just won’t stay buried. In this vivid reimagining of one of literature’s most twisted love triangles, which Mrs. Rochester will get her happy ending?

If you are like me, who was unsatisfied with the ending of Jane Eyre (seriously, Jane, plenty of fish in the ocean), then this modern retelling would definitely appeal to you! Hawkins’ twist on this gothic tale has a few upgrades – Jane is not entirely a naive girl getting seduced, and she is in fact in possession of some edges of her own, the Mr Rochester (Eddie) is charming but comes with red flags poking out, and is surprisingly hot in this one, while the Mrs Rochester is telling her story through a series of ‘diary’ entries. Jane, who is not Jane btw, not exactly – dreams of having the good life, where she doesn’t have to steal or con or be on the run from her past, and Eddie seems like a perfect target. Eddie, for his part, is a handsome widower, and interested in her pretty immediately, which makes her job easier.

I’ve gone so long trying not to be seen that there’s something intoxicating about letting him really see me.

Most of her energy is devoted towards cementing her place in the community, but when whispers about his wife’s disappearance start to gather into louder tones, and with the complicated relationship his wife had with her friend (who also disappeared in the same boating accident) and her husband starts to unravel, Jane wonders if having so much attention brought into her life is a good thing.

What I have is, after all, like winning the fucking lottery, and I’ve learned the hard way that wanting more is what fucks you in the end.

For starters, I like the changes made in this retelling that kept the elements of the original, adapting it to the modern setting. Jane is a foster kid, and her best friend is someone she lost in a similar way; there are however more elements added to her past which change her characterization drastically. This Jane is street savvy, she is able to read people, and direct conversations and situations to her benefit. For the most part, she is smart – until it comes to Rochester, who seems like the culmination of her hard life, and her entry into the rich life, a life she craves even as she views the rich women of the community with contempt. There are moments that she enjoys the women’s company, but also moments where she feels like she needs to prove something, which has her pushing forward her relationship with Eddie. Combined that with an acquaintance of hers who is blackmailing her, she has a tight rope to walk to ensure that she becomes the next Mrs Rochester.

There are lots of “villages” in Mountain Brook: Cahaba Village, Overton Village, and Mountain Brook Village itself. It seemed silly to me, using a word like village to mean different part of the same community—just use neighborhood, you pretentious assholes, we don’t live in the English countryside—but what did I know?

About Mrs Rochester (Bea), well, there was a lot to unpack there in the story, and I liked the focus on telling her version of the events, too. That, and having Eddie’s PoV chapter coming later on in the book brings together the story in an explosive way. It was a nice bit of game Hawkins plays with the reader, and though it is not entirely unpredictable, it is still quite a good mystery. The ending, also feels much more satisfactory, when you see how the romance progresses through the story, and when you keep in mind how the characterizations of the characters affects the storyline. If I had one thing to nitpick about, I would say it was the pace which didn’t sit right with me. The first half builds Jane’s and Eddie’s relationship, and I guess I can see Jane being a bit carried away with the ease with which she gets ahead in her plans and her falling for Eddie a bit factor in that, I still feel that the initial parts of their romance feel fast-fowarded. More attention was given to Jane’s efforts with the ladies, which doesn’t have as much impact on the later thriller aspects of the plot as I expected. Speaking of thriller, I wish there was just a drop of it in the first half – the gothic vibes don’t feel as much then, and later on, there’s a lot going on to feel that vibe, you know.

“Hello?” I call. “Is someone there?” Excellent, I’ve gone the full horror movie. Soon I’ll be running down to the basement in my underwear in the dark.

Still, overall, it is quite an enjoyable retelling and a clever twist on the original story. Finally, I gotta just say – I would’ve loved a thruple too.

Received an advance reader copy in exchange for a fair review from St Martin’s Press, via Edelweiss.

One thought on “ARC Review: The Wife Upstairs by Rachel Hawkins”