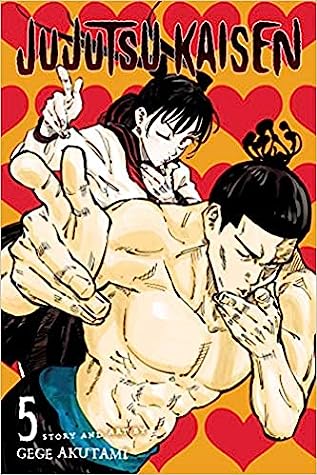 Everyone’s surprised (and not necessarily in a good way) when they find out Itadori is still alive, but there’s no time for a heartwarming reunion when Jujutsu High is in the midst of an intense competition with their rivals from Kyoto! But good sportsmanship doesn’t seem to be in the cards once the authorities decide to eliminate the Sukuna threat once and for all…

This book had so much going for it – we had battles, we had character backstories, we had exposition, we had new techniques and a nice cliffhanger!

First, the battles – because the Kyoto students bent on executing Yuji, what happens is that we have them facing off against the Tokyo students, as the latter realize Yuji is being targeted. An exception is Todo, who is just here for some himbo-on-himbo violence, and upon finding out Yuji is also an ‘interesting person’ like him, he declares the latter to be his best friend (which you could foresee the moment Todo asks him his ‘what kind of girl do you like’ question in the last book) and warns the Kyoto students against getting in his way. Well, nevertheless, best friend or not, he is going to have a battle, which also turns into something like a training session for Yuji, with Todo clarifying his notions about cursed energy flow.

Meanwhile, we get to see a cursed corpse showdown, with Panda and Ultimate Mechamaru facing off to determine who is the superior doll. Finally there are some answers as to what Panda is! I am also very interested in what is going with that Mechamaru dude, and why he is in That Condition. Nobara does a heck of job battling against Nishimiya, who is rocking a witch aesthetic, btw. Nishimiya is harping on about how bad it is for Mai, and for female sorcerors in general, which again makes me wonder what is going on with these ridiculous families to look down upon queens like this? Maki maybe the MVP so far, because she goes up against Miwa and then faces off against Mai, whose backstories we glimpse at again, giving more clarification into Mai’s resentment against her. But the dangerous one here on the field is probably Kano who has been given a trump card by the Kyoto principal.

Overall, so much varies cursed techniques are on display here, and the sorcery canon is also expanded, so it makes me much more excited about what more could be out there. Having us see a bit of the top three families’ drama also lays out some groundwork for current and future character conflicts. I’m still not a 100% satisfied with the artwork, but the movements and anatomy look smoother here, plus the battles are wondrous, so it gets a thumbs up from me.