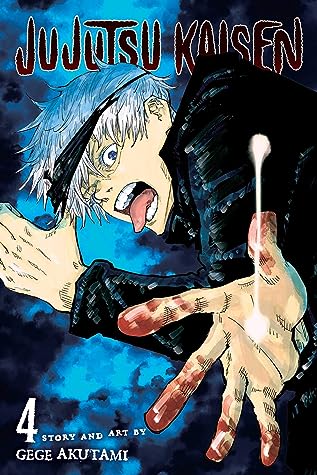 Jujutsu Kaisen, Vol. 4 by Gege Akutami
My rating: 4 of 5 stars

While investigating a strange set of mysterious deaths, Itadori meets Junpei, a troubled kid who is often bullied at school. However, Junpei is also befriended by the culprit behind the bloody incident—Mahito, a mischievous cursed spirit! Mahito sets in motion a devious plan involving Junpei, hoping to ensnare Itadori as well.

Yuji rushes to stop Junpei despite being dissuaded from doing so by Ijichi, and we get to see Junpei’s cursed techniques, to which the former is somehow resistant against? It can’t all be Sukuna, because he refuses to help Yuji when facing up against Mahito, who discovers the vessel of Sukuna himself is a lot to handle. With Nanami joining in the fray and the two of them teaming up against Mahito, the latter unleashes his domain expansion, which is well, quite powerful. I like the way that Yuji unknowingly got Sukuna to help, but I’m still thinking what that bond between them will mean in the future.

We also get Nanami’s backstory in this book – about how he got back into Jujutsu society after leaving it to go be a salary-man. It is interesting to see the characters’ reasons for being a sorcerer, to pursue this path instead of being a regular person; yes, a lot of it does come down to ‘we have to save people because we can’ but with how the upper strata of Jujustsu tech is mired in their own conflicts and drama, it is a good change of pace. The curses (and cursed user) meanwhile are looking to their main goal instead of infighting – to bring about an age of curses, even if they aren’t there to see it.

The second half is the ‘friendly’ Goodwill Event with the Kyoto School, which is anything but friendly. Never mind the student rivalry, the moment Yuji is introduced as a surprise by Gojou, the Kyoto principal goes full-on ‘take him out’ to his students. Their competition has them doing a hunting session, as in, they have to take out curses in a bounded area, but we all know that is just an excellent excuse for a ‘hunting accident’. Todo, who is a straight shooter, doesn’t want any part of his principal’s schemes and goes out for a direct attack; I feel like he would be an excellent addition to Gojo’s class.