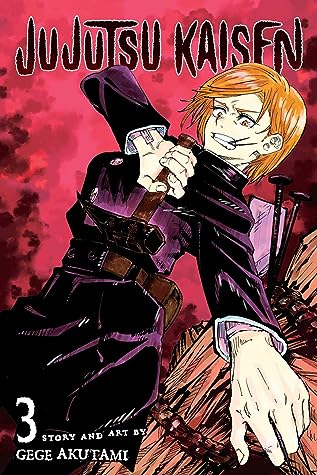 Jujutsu Kaisen, Vol. 3 by Gege Akutami
My rating: 4 of 5 stars

A cursed womb mysteriously appears at a detention facility. Itadori and his classmates are dispatched to the scene, but they’re in for quite the surprise when they’re attacked by a special-grade curse! Itadori allows Sukuna to take over his body in order to survive, but the consequences are more drastic than anyone expected!

The second year students from Kyoto school are bullying Megumi and Nobara, with the meathead one going after the former, and Mai (who also happens to be Maki’s twin – I wonder why they are in different schools and what the story is there) deals with Nobara. During Megumi’s fight, references are made to the events of Jujutsu Kaisen 0 as well as what is going on with Okkotsu these days; seems like he has gained a Reputation since then, to have this dude itching to go up against him. Again, I don’t really understand the rivalry between the schools when they are all having bigger fish to fry, but I assume the principals are doing it to foster a competitive spirit to make them improve?

Speaking of principals, Gojou delivers a nice threat to the one from Kyoto, and in between the lines emerges the possibility of a larger arc regarding jujutsu itself. I feel like the fight between Sukuna and the Special Grade Curse in the previous volume and the power difference between them also sort of connects to the point Gojou was making. And in this volume, we get properly introduced to the Special Grade Curse Mahito who was last seen conversing with Getou – their plans to rope in Sukuna are going full steam ahead. Two new characters – Junpei and Kento – appear in this volume. Junpei, a student who was bullied extensively, finds Mahito as the latter transmogrifies a trio of students who also happen to be Junpei’s bullies. The case is undertaken by Kento, with Itadori to assist and train under him for the time being.

In terms of cursed techniques, this volume again introduces something new to the canon. Mahito’s abilities to modify bodies relies on utilizing cursed energy in a twisted way – raising some moral and ethical dilemmas on the way. Kento’s cursed techniques introduces a new aspect of the use of cursed energy, as in how limitations and restrictions are imposed. It feels very different from Gojou’s impressive power, and for once, we see a drawn-out battle with two adversaries with not much advantage over each other. We also get to see the results of Itadori’s training, as he debuts his Divergent Fist (is it a cursed technique? it was given a title card like one). Itadori, meanwhile, is about to be tested as he befriends Junpei (who he was supposed to watch and investigate) and Junpei himself, who didn’t know about jujutsu and who has been taken under Mahito’s wing, is being used to force Itadori’s hand.

As for the new characters, I definitely love Kento most, simply for the fact that he is a Responsible Adult who doesn’t think the kids should be thrown into battle when there are adults to do it. Like, Gojou has the same ideology too – he wants the students to be kids and enjoy their childhood – but he also admits that he is training them with tough love, training them with missions. Admittedly, he also does so under his supervision where he can step in to save them if they are in over their head. As opposed to the bigwigs of Jujutsu world who just in the last book endangered three kids.

Finally, I’m eager to see where Getou’s plans are eventually leading to. While he is a cursed user, the fact is he is still a sorcerer and most of curses so far look down on humans and sorcerers alike, so I am interested in how he got here and what he intends to do to change the world order.