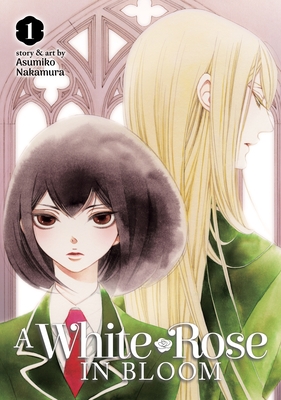 A White Rose in Bloom, Vol. 1 by Asumiko Nakamura
My rating: 4 of 5 stars

A yuri story about romance between girls from the creator of the modern BL classic Classmates: Dou kyu sei!

Ruby is a student at an elite European boarding school. Things are going pretty well for her until she finds out that she won’t be able to go home at Christmas. Instead, she’ll be stuck at school with only one other student–the aloof and beautiful Steph–for company. As Ruby tries to understand Steph, she becomes more and more interested in the other girl. But can she break through Steph’s icy exterior?

A White Rose in Bloom has a yuri story in a boarding school, with an aloof girl, Steph, and an extroverted girl, Ruby, as the main characters. Steph has a reputation at the school of having a cold personality and a prosthetic leg, which is why she is also called Steel Steph. Ruby, meanwhile, gets interested in the mystery of her, when she is forced to stay at the school for the winter break as her parents are trying to save their marriage with a last-ditch attempt of a trip. She naturally has some resentment about having to stay back, and misses a warm Christmas celebration which is lacking at the school, and in Steph’s interactions with her. However, they have a moment where they bond, which becomes the catalyst for a developing relationship, that has the school buzzing about it, and Ruby being the target of some envy.

The artwork is beautiful and stylistic, with the character design and movement bringing out the emotional impact of the scenes so well. The pace is slow but it works for this slowly developing love story. There’s still a lot Ruby doesn’t know about Steph, so I guess there is potential for angst and tension in future volumes, much like how it was in this one. The extras at the end were so cute, and I am starting to love even the cast of secondary characters.

One thought on “ARC Review: A White Rose in Bloom, Vol. 1 by Asumiko Nakamura”