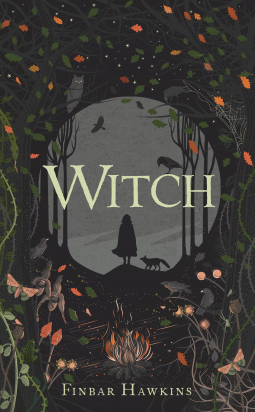 Witch by Finbar Hawkins
My rating: 2 of 5 stars

After witnessing the brutal murder of her mother by witch-hunters, Evey vows to avenge her and track down the killers. Fury burns in her bright and strong. But she has promised her mother that she will keep Dill, her little sister, safe.

As the lust for blood and retribution rises to fever pitch, will Evey keep true to the bonds of sisterhood and to the magick that is her destiny?

I think the simplest way I can sum up my feelings for this book is that it felt like a novel that could have been better edited into a novella.

The story is about Evey, who lives with her witch mother and witch younger sister, Dill, and has no powers of her own; envious, she rejects her mother’s practice. When witch hunters come to kill her mother, she runs away with Dill, and in a fight, she takes a stone that was entrusted by her mother to Dill. Leaving Dill with a coven, Evey then sets out to kill the four men who had killed her mother. On her journey, she finds an ally in a noble girl, Anne, who also had a similar situation with her mother and sister, and who helps her get her revenge.

Firstly, the writing style wasn’t really for me. The dialogue style and the scenes tended to be more verbose than necessary, and in a book that was already slow-paced, it felt like the plot was dragging on. Additionally, it didn’t make me feel emotionally connected to the characters, and at some point I just gave up on the writing and speed read through most of the story. I feel like it was trying to write a story about sisterhood, and empathy, but you know, the way it was rendered onto text didn’t quite hit the mark. Even the ending felt sort of awkward because I sort of expected that particular development to come earlier and not like some convenient plot timing.

Received an advance reader copy in exchange for a fair review from Zephyr, via Netgalley.