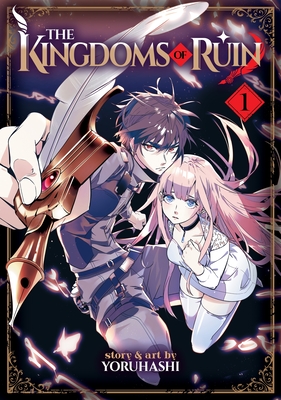 For ages, humanity flourished through the power of magic, a gift from witches to aid mankind. But times have changed. The scientific Gear Expansion has made both magic and witches obsolete. In order to liberate humanity from the blight of magic, the mighty Redia Empire began a ruthless hunt to exterminate all witches. Adonis was only a boy when the hunt began, apprentice to a witch he dearly loved. When she perishes at the hands of the empire, Adonis vows revenge. By this furious wizard’s power, blood will flow!

A witch-hunt plot in a science fiction setting makes this shonen series a bit different, though there are plenty of tropes in the story. Adonis, who was a young boy under the care of Chloe (who happens to be the most powerful witch in the world), is deeply traumatized when she is executed brutally in front of him. She was one of the victims of Emperor Geothe’s mission to rid the world of witches, who were a separate race that helped humankind since ancient times; with new technology, he feels the age of witch’s superiority over humans is over and mankind needs to prove its dominance. 10 years later, a woman named Doraka frees Adonis from his imprisonment at the same internment camp where she is kept. Upon gaining his freedom, he immediately launches a massive attack on the city, causing mass destruction, until Doraka herself attempts to stop him.

Now, the anti-witch sentiment in the populace is pretty much what you expect in nearly every witch-themed novel; its only so unusual to see a crowd of people with smartphones recording the quite violent execution of a witch, who, BTW, was ready to stand down to protect her apprentice. You see like zero sympathy from all the people gathered there, so you kind of see where Adonis is coming from when he decides to destroy the empire that chose to enthusiastically eradicate an entire race of people. He reasons that even though some of the people are different a decade later, they have all benefited from the carnage and so there are no innocents. At first, I was confused as to why Doraka herself would have any reason to save the city while walking into the blast zone, since the empire had imprisoned her too. It makes sense in a way, but I will wait until volume 2 to see how reasonable it is.

The world-building of the book, to be frank, is quite lacking. The only thing we know is that there is the empire, and there were witches killed, and some of them tried to escape to safer countries. If there are other countries that could provide refuge, how did the empire even get to claim that witches were eradicated. Also, like, in a decade, no witch tried for vengeance? It is specifically mentioned that the anti-magic device used against Chloe was gathering dust in a secure facility somewhere. Another thing that I felt this book did not do well was the way the violence was depicted – with most of it against women, and quite gratuitous in nature (even for a shonen manga), it feels like it is trying to go with ‘what would be most upsettting’. Chloe’s death is depicted not once but twice; the women in the internment camps being used for prostitution is depicted in a cruel manner. There’s also the prison warden being queer-coded – which falls in the regular trope of queer-coding a villain character for kicks.

Finally, the artwork – it is pretty good: the character design, and the clothing design, as well as the storyboard have good choices. The fight scenes are also well done – Adonis’ magic is also depicted in an awe-inspiring way, which makes the sheer magnitude of the forces of magic and science against each other feel more impactful.