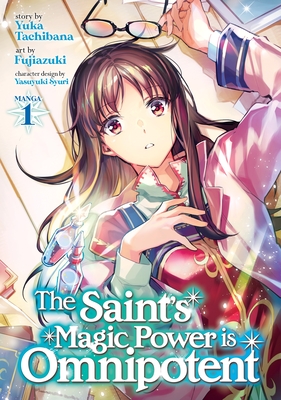 The Saint’s Magic Power is Omnipotent Manga, Vol. 1 by Fujiazuki
My rating: 4 of 5 stars

Living the workaholic life in her mid-20s, Sei never expected she’d be summoned to another world, let alone obtain the power of a living Saint. And she especially didn’t expect to be totally ignored by the locals! While the kingdom desperately needs a hero, it turns out Sei was just the backup option. Left alone, she explores her newfound powers at the royal Research Institute, unraveling the mysteries of magic potions. As she helps the sick and the dying, her talents reveal themselves. Might Sei be the Saint this world needs after all?

A cute light entry into the isekai genre, this novel has an office worker, Sei, swept into another world as a Saint, along with another teen (both from Japan, incidentally), Aira. However, since only one was supposed to be summoned by the arcane ritual, and the Crown Prince in charge of the summoning takes the teen as the Saint since Sei, having just come off a long work week isn’t looking her best; she, however, does take offense to just being ignored. As she can’t return to her world, she attempts to leave, but is mollified by the palace staff into staying. Sei, though, wants to be of use, and when she finds that the herbalists at the palace are fine with taking her in, she moves in as a magical herb researcher. A bonus is that she already had a hobby for aromatherapy and stuff back home, and with her magical skills, she starts to make very effective potions. However, she is still lying low as the Saint, and her identity in the kingdom is not well known, so she has to keep it secret to regular folks, but also she is eager to test the limits of her skills, which makes for interesting situations. Along side this is cast of adorable characters who support her, both directly and behind the scenes, plus a gallant knight for romance.

Coming fresh from reading the novel, I would say the manga is a faithful adaptation of it, though it does make some delightful additions. Johan is probably the most entertaining, because the manga brings out his teasing nature so well. Humorous situations in the novel are also made more so with the art, which makes up for the novel’s writing; in fact, the manga might be the better version to go with, for the story, excuse me for my blasphemy. Seriously, though, it isn’t missing much details, and the only drawback is that volume one of the manga is only about half of the volume one of the novel, and yeah some extras from the novel don’t make it here. But otherwise, with respect to storyboards, character design and general rendering of the character’s personalities, I like the manga!