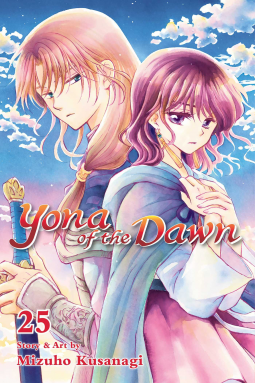 Yona comes face-to-face with Su-won and tells him that waging war against the nation of Xing would be disastrous. Later, she rushes back to Princess Kouren, but assassins and more dangers await in Xing! Will the Four Dragons be able to protect Yona from all who threaten her life?

Yona finally gets a chance to present Princess Tao’s terms before Soo Won, and while he tries to be adamant about it, the realization that she mobilized the Fire Tribe to send up that signal as well as the fact that Riri is close to her, and coincidentally happened by to stop her Water Tribe soldiers from harming Yona, has both him and his advisors wary of Yona’s growing political power. Also, I’m in awe of Yona displaying her powerful force again – when she faces Soo Won head-on, and later, when another aspect of the dragon’s powers is revealed. While she carries back his terms to the Xing kingdom, they are themselves having a Situation on their hands.

We get to see some of the issues from Kouren’s side, and what her suspicions are regarding the anti-war faction that wants to support Tao. Also, MIzara’s statements keep ringing in her head, and when the High Priest that leads the anti-war faction plays his hand, they are all swept up in an attack that has them on the same side. With tensions brewing among the factions of Xing at the border, and the sisters being stuck in a power struggle, it seems dire over in Xing. Kouren’s story, meanwhile, told briefly through one of the Five Stars, tells of a strong but young princess who had to grow up pretty fast to take on the responsibilities of running a kingdom; also, the trauma from the invasion by Kouka last time has been seared into her, that you can understand why she hesitates to trust Soo Won, who is the son of the man who did war crimes on her country. How the issues between the two kingdoms will be resolved is yet to be seen and it has me so nervous!

One thought on “ARC Review: Yona of the Dawn, Vol. 25 by Mizuho Kusanagi”