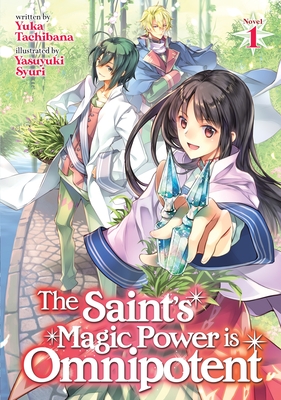 The Saint’s Magic Power is Omnipotent (Light Novel) Vol. 1 by Yuka Tachibana
My rating: 3.5 of 5 stars

Sei, a 20-year-old office worker, is whisked away to a whole new world. Unfortunately for Sei, the ritual that summoned her–meant to produce a Saint who would banish the dark magic–brought two people over instead of one. And everyone prefers the second girl over Sei?! But this is just fine by Sei, who leaves the royal palace to set up shop making potions and cosmetics with her newfound magic. Business is booming, and this might not be such a bad life, after all…as long as her supposed Sainthood doesn’t come back to haunt her.

A cute light entry into the isekai genre, this novel has an office worker, Sei, swept into another world as a Saint, along with another teen (both from Japan, incidentally), Aira. However, since only one was supposed to be summoned by the arcane ritual, and the Crown Prince in charge of the summoning takes the teen as the Saint since Sei, having just come off a long work week isn’t looking her best; she, however, does take offense to just being ignored. As she can’t return to her world, she attempts to leave, but is mollified by the palace staff into staying. Sei, though, wants to be of use, and when she finds that the herbalists at the palace are fine with taking her in, she moves in as a magical herb researcher. A bonus is that she already had a hobby for aromatherapy and stuff back home, and with her magical skills, she starts to make very effective potions. However, she is still lying low as the Saint, and her identity in the kingdom is not well known, so she has to keep it secret to regular folks, but also she is eager to test the limits of her skills, which makes for interesting situations.

The setting of the story is quite basic – girl gets plopped into a medieval Europe style world, she has better knowledge of stuff due to modern times and thus has an advantage. The world-building is generic – there are people with elemental abilities, and Sei, as the Saint has an extra of divine magic as a Saint, which gives an extra boost to her other abilities. I did find it interesting, though, that when they assess their own skill, it comes in the form of stats like a game, even though she hasn’t transmigrated into a game. The mood is more slice of life – with her increasing renown building up to the eventual wide-spread reveal of her secret. Sei herself has a casual but relatable reaction to all the changes in her life, taking into stride the culture shock, the (un)availability of delicious food (which she rectifies). To be fair, there aren’t many obstacles in the story – as the Saint, the palace automatically smooths things over in the background, like her new job, living and stuff. Also, her boss is very good at taking care of any issues that may arise, like her new potions being too effective, and quietly manages it in the background, with cunning towards the other people, who might use her.

There is also romance in the story, with a knight who she saves from death. It is a bit cliche, with him being considered aloof and icy by others, but he is always warm and friendly towards her, always coming around to help, etc, plus he is friends with her boss, so there is the added humor in her boss subtly teasing his friend in the background. I had first thought there might be another love interest in the colleague, but I’m glad it is not turning into a love triangle or a harem situation (so far, though there isn’t any indication it will change). The writing is sorta okay – I found it a bit clunky at times, and repetitive occasionally, but the story and setting do keep things interesting enough to have you engaged, and invested in the characters.

Overall – if you want a cute isekai novel with an older protagonist, this might be up your alley!