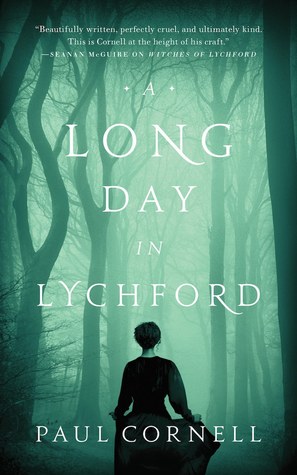 A Long Day in Lychford by Paul Cornell
My rating: 3 of 5 stars

It’s a period of turmoil in Britain, with the country’s politicians electing to remove the UK from the European Union, despite ever-increasing evidence that the public no longer supports it. And the small town of Lychford is suffering.

But what can three rural witches do to guard against the unknown? And why are unwary hikers being led over the magical borders by their smartphones’ mapping software? And is the European question *really* important enough to kill for?

Warnings: mentions of microaggressions and racism

A Long Day in Lychford continues the theme of the trio of witches – Judith, Lizzie, and Autumn being protectors of the town. However, this time around, Autumn starts to question the people around her, and their mission, as this book is set in the aftermath of the Brexit vote and the Trump Build-the-Wall rhetoric. I don’t remember if it was mentioned before, but it is in this book that Autumn is Black, and more importantly, the only person of color in Lychford, and while she more or less knows how to fight back against the microaggressions and snap back at bigots, this situation brings a new form of alienation. A fight with a bigot has her accidentally (well, drunkenly) break the protections of the town.

When she suspects Judith of having had voted to Leave, it causes an argument between them, and it is probably a bad time for them to be having disagreements, because they have another crisis on their hands. There are missing people, and finding them leads them to discrete pockets of time and space that they have to navigate on their own. Autumn is also pondering their mission as witches to protect from ‘outsiders’ to their realm, which feels horrifyingly like building a wall to keep others out. I, for one, feel the two situations aren’t exactly comparable, since immigrants are not a threat, unlike the eldritch forces that could be. It feels like there was an attempt to connect the two and make some sort of ‘there are valid arguments on both sides’ sort of thing, which didn’t really fit well with the story. Especially as it seems like they will have to prepare for an opportunist taking advantage of the weakened borders.

As an audiobook, it was not a great experience for me. I hadn’t noticed that the narrators have been different for each book. I had read the first one and second one quite apart, and they didn’t strike me as anything unusual enough to look up who is narrating them. But for this one, I noticed early on there was quite a difference – with changes in how the accents were done, as well Judith’s and Lizzie’s voices sounding too close to tell them apart often, and moreover the cadence had me losing track multiple times, or not understanding the diction well enough.

Previous books in the Lychford series